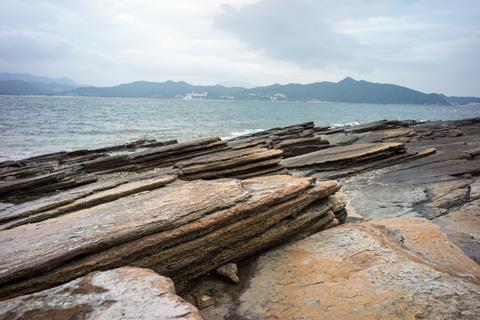 The team used thallium isotopes in shale deposits to track oxygen levels in the ocean 50,000 years before the anoxic event

Around 94 million years ago, oxygen levels in many oceans fell dramatically. The 600,000-year spell of suffocation caused many marine organisms to go extinct, and scientists are still divided over the exact cause. Now, however, researchers in the US have studied the thallium isotope ratio in sedimentary rocks laid down around 50,000 years before the main event, and concluded that the sediment-water column was becoming gradually deoxygenated. They warn that fertiliser pollution and climate change are causing similar deoxygenation on Earth today.

Anoxic events have occurred multiple times in Earth’s history. They can be triggered when fertilisation of the oceans increases plant life, eventually producing lots of dead organic matter that oxygen-consuming bacteria feed on. ’It’s a net O2 loss in the oceans,’ explains geochemist Chadlin Ostrander of Arizona State University and Woods Hole Oceanographic Institution in the US. Anoxic events can be seen in the geological record by organic-rich black shale deposits.

In an oxygen-rich ocean, manganese mainly exists as the insoluble Mn4+, causing manganese dioxide (MnO2) deposits to precipitate onto the ocean floor. In anoxic oceans, however, manganese is principally the more soluble Mn3+ or Mn2+, which remain in the water column. Therefore, it should in principle be possible to monitor historic water oxygen levels by looking for MnO2 deposits in the sedimentary rock. Unfortunately, these deposits can be removed if the water becomes deoxygenated, corrupting the geological record.

The team looked at black shale sediments from a site called Demerara Rise in the Atlantic Ocean. MnO2 would not have been deposited in this highly reduced environment, but iron sulfide – which is common – also takes up thallium, with no isotopic preference. ‘We’re targeting [these] sediments because they preserve the thallium isotope composition of seawater,’ explains Ostlander, ‘That seawater isotope composition will tell you roughly what fraction of the ocean floor had manganese oxides.’

The researchers looked at sediment estimated to have been deposited 32,000–54,0000 years previously, and noticed a significant increase in the proportion of thallium-205 over lower sediment from the anoxic event itself. This suggests that the proportion of thallium being removed from seawater by manganese oxides had dropped by 40%–80% long before the onset of the black shale deposits. ‘It’s a progressive deoxygenation of the oceans,’ says Ostlander. ‘Sediment-water interface deoxygenation predates [severe] water column deoxygenation.’ This is important, he says, because fertiliser runoff and climate change are causing progressive deoxygenation of today’s oceans, but there is no evidence so far that the highly reducing, so-called euxinic environments during historic anoxic events are expanding. ’Just because we don’t see an expansion of euxinia today, it doesn’t mean we’re not in trouble,’ he concludes.

Stratigrapher Hugh Jenkyns of the University of Oxford, UK, says that, thanks to advances in mass spectrometry, ‘there’s a whole raft of new metal elements whose isotopes people are starting to look at to see what they can tell them’. ‘Thallium isotopes are a fairly novel proxy,’ he says, ‘and they see a big shift. I think it’s significant work.’