Where did Earth’s water come from? 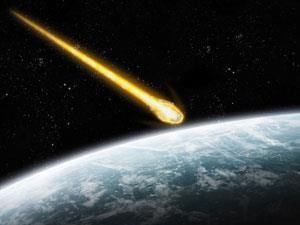 Researchers examining hydrogen isotope ratios in meteorites appear to have thrown a spanner in the works of the latest models of how elements such as hydrogen and nitrogen reached the early Earth. The finding throws up questions about where all the Earth’s water came from and how life on Earth began.

One big question that remains unanswered about the evolution of the early Earth is how volatiles such as hydrogen, nitrogen and carbon arrived – their presence being crucial to the origins of water and life. The two main candidates for the sources of these elements are asteroids, found between the orbits of Mars and Jupiter, and comets, which come from the colder outer reaches of the Solar System. Current models suggest that at some point in the evolution of the Solar System, a jolt to the orbits of Saturn and Jupiter caused  comet-like material in the outer Solar System to be flung inwards into the present-day asteroid belt – eventually arriving at Earth and bringing the crucial volatiles.

Now, a new study led by Conel Alexander at the Carnegie Institution of Washington, US, has taken a significant step towards solving the conundrum.  Alexander’s team compared the hydrogen isotope ratios in chondritic meteorites, ancient fragments of asteroids, with those that have been measured in comets. In the outer Solar System, the birthplace of comets, the extreme cold results in frozen water having a higher proportion of deuterium than ice formed in the less cold regions. ‘We can measure the hydrogen isotope ratio of ice in comets remotely by infrared and submillimetre spectroscopy. We can measure the ratios in meteorites by analysing the hydrogen that is there – which is typically in the form of hydrated silicates, such as clays, that are the remnants of ancient water,’ explains Alexander. The team analysed the hydrogen isotope ratios in 86 meteorites, and showed that the proportion of deuterium to hydrogen was lower than in comets. ‘So, if we seem to have ruled out comets as a source of Earth’s volatiles, that leaves asteroids. We also analysed the nitrogen isotope ratios of the meteorites. We found that of the various types of chondrite the hydrogen and nitrogen isotopic compositions of one type, the CI chondrites, tallied most closely with what we see on Earth, suggesting that the parent bodies – asteroids – of these types of meteorite were the dominant source of the Earth’s volatiles.’

Other experts are intrigued and impressed by the work. Philip Bland of Curtin University in Australia says: ‘This is a really nice piece of work, a fascinating contribution to an old question – where did Earth’s water and organic material come from? The work is especially timely as it places compositional constraints on recent dynamical models of early Solar System evolution, contradicting a number of their predications.’

Jamie Gilmour of the University of Manchester in the UK comments: ‘It’s interesting in itself that these asteroids have a distinct D/H [deuterium to hydrogen] ratio from the comets, since dynamical models have predicted that they share an origin. It seems that some meteorites arriving today are from asteroids similar to the precursor material that brought water in the early Solar System, so future  work may shed more light on this enigmatic early step in the formation of the Earth.’