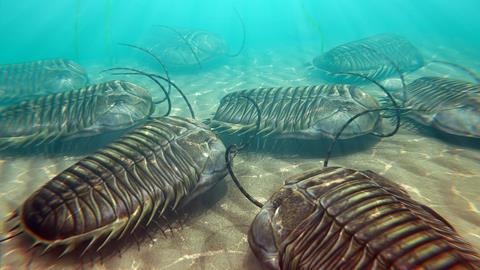 The mixing of sulfide and oxygen-rich waters in the prehistoric Panthalassic Ocean contributed to the largest mass extinction of the last 540 million years. These new findings by Chinese and US researchers still have relevance today, as present-day climate change is exacerbating the growth of sulfidic zones in the world’s oceans.

Around 252 million years ago, the end-Permian event wiped out nearly all life on Earth in the most devastating extinction event in the planet’s history. More than 80% of marine species disappeared and it took several million years for these ecosystems to recover.

At this time the Panthalassic Ocean spanned 70% of the Earth’s surface. Today, the ocean floor that once sat under the Panthalassic has almost completely disappeared, with the only preserved sediments found in Canada, Japan and New Zealand. Using samples of fool’s gold found in these deposits, a team of geochemists led by Yanan Shen, of the University of Science and Technology of China, has tracked the changes in ocean chemistry that drove this catastrophic extinction event.

By analysing sulfur isotopes in pyrite minerals, the team concluded that ‘the main killing agents’ were brought about by the mixing of sulfide-rich waters from the deep ocean with oxygenated shallow waters. Exactly what caused this increased mixing is still a mystery, however. ‘Sulfide is toxic to eukaryotic cells and we know that hydrogen sulfide at concentrations of a few hundred parts per million would be lethal to humans, if exposed for a prolonged time,’ explains Shen. ‘The shoaling of sulfidic waters, therefore, would kill marine animals in the Permian–Triassic oceans.’

Timothy Lyons, a biogeochemist from the University of California, Riverside, US, who was not involved in the research, describes the findings as ‘tantalising’. He explains that by measuring four different sulfur isotopes the researchers could fingerprint specific sulfur metabolic microbial pathways, gaining insight into the prehistoric ocean’s chemistry. ‘When viewed in a temporal context, [the data] points to highly dynamic conditions and major perturbations to the marine system,’ he says. ‘Evidence for episodic intrusions of sulfide into shallow waters may be the smoking gun for both the mass extinction and the protracted biotic recovery that followed.’

Although the end-Permian extinction happened over a quarter of a billion years ago, the events that triggered it have added significance in the light of current-day climate change. ‘Satellite remote sensing has clearly shown that massive fish mortality in the Namibian coastal waters are associated with sulfidic waters,’ says Shen. ‘As a matter of fact, due to human-induced eutrophication and global warming, the episodic occurrence of hydrogen sulfide has been reported in many coastal waters – such as those of the Gulf of Mexico, California and western India.’

This warning is echoed by Lyons, who notes that there ‘are lessons to be learned from this event, as we face warming in the present-day ocean’.