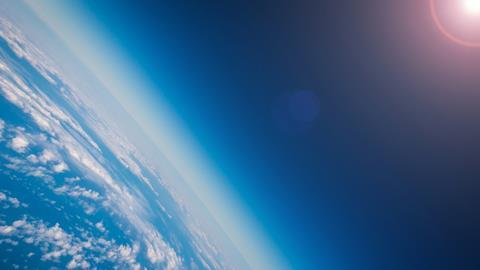 Rapidly increasing use of the industrial solvent dichloromethane (DCM) is leading to the chemical accumulating in the stratosphere where it could set the recovery of the ozone layer back by 30 years, atmospheric chemists in the US have found.

Unlike long-lived ozone-depleting chemicals, such as chlorofluorocarbons (CFCs), DCM production is not controlled by the 1987 Montreal protocol – the international agreement designed to protect the ozone layer. Although DCM reacts with ozone, its half-life in the stratosphere is much shorter, a matter of months rather than years.

But DCM’s use is increasing. As a common industrial solvent it has a wide variety of applications. It is an ingredient in paint stripper, used for metal cleaning and degreasing or as a chemical feedstock to produce drugs and other chemicals.

‘Ironically, this includes its use in the production of certain “ozone-friendly” chemicals that were developed to replace CFCs,’ says Ryan Hossaini from Lancaster University, UK. He adds that it is thought that its use in developing countries is rising as they develop their chemical and pharmaceutical industries. ‘Scientists had been aware that dichloromethane was increasing in the atmosphere, though the implications for stratospheric ozone and future recovery of the ozone layer were unknown,’ says Hossaini.

He and his colleagues used measurements from the US’s National Ocean and Atmospheric Administration to calculate the rate at which DCM levels have increased in the stratosphere, and found that the concentration has approximately doubled since the turn of the millennium. They then used computer simulations to model the effect future increases might have on the ozone layer.

‘For a scenario in which dichloromethane remained at present day levels throughout coming decades (i.e. no further increases), the return of Antarctic ozone to pre-1980 levels was delayed by five years,’ says Hossaini. ‘If we assumed dichloromethane growth continued into the future, at the mean rate observed over the 2004–2014 period, then the delay was 30 years.’

Even if DCM is taken out of the simulation altogether, the date of ozone returning to pre-1980 levels comes out at 2065, raising the possibility that if DCM usage increases more rapidly than the current rate, it could push the recovery date into the next century.

‘We need to continue monitoring the abundance of dichloromethane, and other non-Montreal Protocol compounds, and be mindful to the increasing threat to stratospheric ozone,’ Hossaini says.

Dwayne Heard, an atmospheric chemist at the University of Leeds, UK, says it is surprising that DCM is not a controlled substance, given its increasing use and potential future impacts. ‘The future changes in DCM are unclear, but this paper shows that increases in DCM are offsetting some of the benefits from the Montreal Protocol, and adds uncertainty to future ozone predictions,’ he says. ‘Policymakers need to take note of this, and it wouldn’t be surprising if DCM became more regulated in the future.’