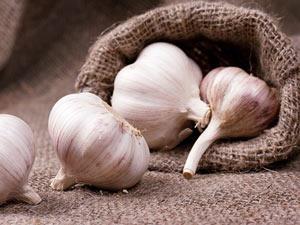 New mechanistic investigations at the interface of chemistry and biology reveal thiosulfinates of garlic and petiveria are not the superstars of the antioxidant world they were once thought to be.

Allicin, a thiosulfinate from garlic, well-known for its potent antimicrobial activity, is a popular molecule under investigation for its medicinal potential to treat diseases such as cardiovascular and neurodegenerative diseases. It has long been hoped that its biocidal properties would translate into therapeutic effects in human cells. Previous studies carried out in organic solution indicated that allicin and petivericin, an analogous thiosulfinate derived from the South American plant Petiveria alliacea, were potent radical-trapping antioxidants because they decompose to give sulfenic acids that reduced free radicals and inhibited the undesirable oxidation of important biomolecules.

Now, Derek Pratt’s team at the University of Ottawa, Canada, bring chemical rigour to studying allicin’s biological action with their latest research, by observing the effects of these natural compounds and some synthetic analogues in more relevant biological conditions - the biphasic systems of liposomes and cells.

‘Our data show that allicin and petivericin are not antioxidants in cells at all,’ states Pratt. ‘These compounds just kill the cells by arresting cell growth.’ In the model systems, glutathione levels dropped when allicin and petivericin were added, initiating a cell death cascade of biochemical reactions. ‘It appears that they are antioxidants but really, they’re toxic.’ Pratt hypothesises that the hydrophilic sulfenic acids derived from these compounds partition to the cytosol. Here, they are physically sequestered away from free radical species at the lipid membrane so cannot actually trap radicals. 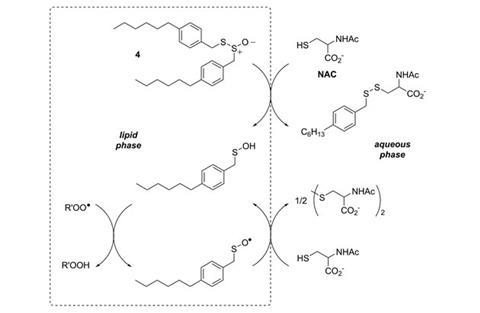 ‘Pratt has placed this chemistry within a biological context, where interfacial considerations can exert significant effects not seen in solution chemistry,’ comments biochemist Tony Postle, from the University of Southampton, UK. ‘In an environment where there is an interface you get different results - this is a strong take home message.’

Interestingly, a very different story can be told of the synthetic analogues of petivericin. Unlike petivericin and allicin, a more lipophilic analogue, hexylated petivericin, does not deplete glutathione levels and does not kill the cultured cells. Pratt proposes a mechanism whereby this molecule, more hydrophobic in nature, partitions to the lipid membrane, localising at the lipid-cytosol interface. Here it can react with cellular thiols, releasing the lipophilic sulfenic acid. Anchored in the membrane, the sulfenic acid is well-positioned to trap peroxyl radicals at the interface, preventing disease-associated lipid peroxidation. The resulting sulfinyl radical can be regenerated by more thiol species.

‘This mechanism is reminiscent of the way vitamins E and C work together,’ explains Pratt. ‘Vitamin E traps radicals in the lipid bilayer, and vitamin C regenerates the vitamin E by reducing it.’

Pratt confirms that these synthetic analogues of petivericin will now be examined in animal models of cardiovascular and neurodegenerative diseases, in collaboration with physiologists.