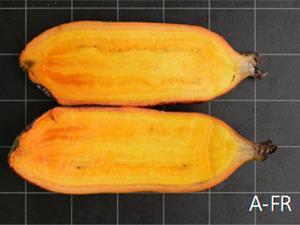 Studying bananas that are naturally rich in carotenoids could hold the key to addressing vitamin A deficiency in developing countries, researchers in Australia claim.

Not getting enough vitamin A can lead to permanent blindness. Vitamin A deficiency is a growing problem in parts of the world, such as south-east Asia, where not enough foods rich in carotenoids – red/orange pigments that are the main dietary source of vitamin A – are eaten.

Researchers hope that one day they will be able to genetically engineer fruits that contain higher levels of carotenoids than the most popular varieties, as a way to easily boost vitamin A intake in these regions. As a step towards this, Cara Mortimer and colleagues at Queensland University of Technology compared Asupina bananas, which are naturally high in carotenoids and have a characteristic golden colour, with the universally popular Cavendish variety. The team identified several important differences in their biochemistry that could provide future targets for genetic engineering.

They found that the high carotenoid variety expressed much less of an enzyme involved in breaking down carotenoids – carotenoid cleavage dioxygenase 4 – and also stored the carotenoids it produced in specialised cell structures. This shifts the equilibrium when the cell is at rest towards even higher production of carotenoids.

The team say engineering fruits with a similar metabolism could provide an easy way to provide vitamin A supplementation in parts of the world that are prone to deficiency.