A California appeals court has drastically reduced the damages that Bayer must pay in a lawsuit linking the herbicide glyphosate (Roundup) to cancer. 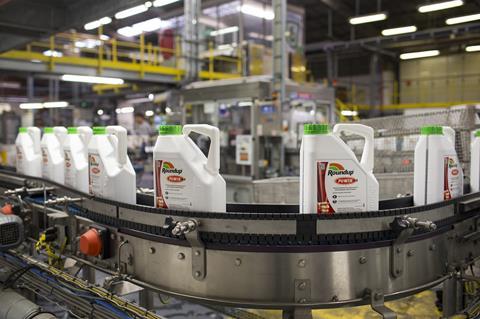 In the 20 July decision, the court said that Dewayne Johnson and his lawyers had provided ‘abundant’ and ‘substantial’ evidence that glyphosate and other ingredients in Roundup products caused his deadly form of non-Hodgkin lymphoma. However, it cut the damages awarded to $20 million (£16 million) – nearly 75% less than the $79 million that the trial judge had allowed, which in itself was a very dramatic cut from the $289 million awarded by the jury in August 2018.

Bayer maintains that the original jury’s verdict and damage awards are ‘inconsistent’ with the evidence at trial and the law and will consider options, including an appeal to the California supreme court.

Jean Eggen, a law professor at Widener University in Delaware, US, says the appeals court ruling is not good news for Bayer. ‘The court held that the jury’s finding of causation was substantially supported by the evidence, which was the main legal issue in the case,’ she explains.

‘Bayer is most certainly paying close attention to that decision, as it may be indicative of how other courts will rule on the same issue in future cases,’ Eggen adds. The company is making efforts to settle as many of the outstanding Roundup personal injury claims as it can, and this decision should motivate Bayer to move quickly, Eggen suggests.

The Johnson case is separate from Bayer’s June proposal to pay more than $10 billion, primarily to settle nearly 100,000 US lawsuits that attribute Roundup exposure to cancer. Bayer has since withdrawn the portion of that agreement that focused on potential future litigation. The resolution of the current cases and claims remains in place, the company said.

Of the $10 billion settlement proposed in June, $820 million went towards lawsuits related to water contamination with polychlorinated biphenyls (PCBs), which Monsanto produced from the 1930s until 1977.

Meanwhile in separate legal action, the Washington, DC attorney general agreed a $52 million settlement over local pollution relating to Monsanto’s production, promotion, and sale of PCBs. There are at least 36 bodies of water in the district with high levels of PCB contamination, including the Potomac and Anacostia Rivers.