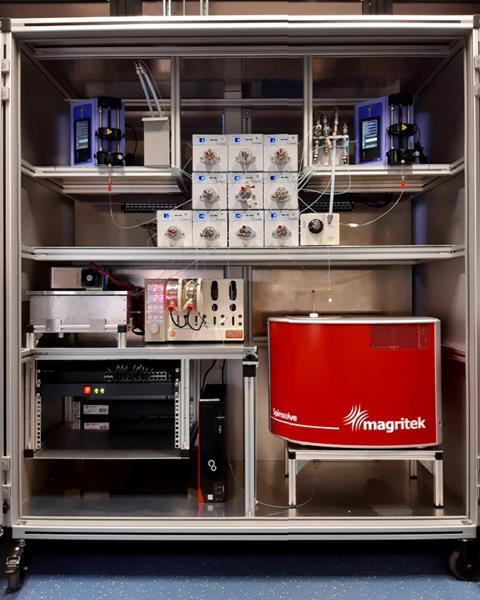 A fully automated organic synthesis platform has been developed that can perform multiple reactions efficiently using the bare minimum of equipment and without having to manually change reactors. What’s more, the system can be operated remotely, which could lead to ‘chemistry server farms’ containing hundreds of automated platforms that scientists could log in to from anywhere in the world.

Automated systems can currently produce large molecules such as DNA and peptides via repeating cycles but this limits the types of chemistry that can be performed. The benefit, however, is they can use a single reactor. Small molecules are usually made sequentially by transforming starting materials into the target compound. But to do this continuously a lot of equipment is required that’s often redundant and has to be manually rearranged.

Now, a new radial approach combines the strengths of both cyclic and linear systems while streamlining them. Designed by Kerry Gilmore’s lab together with Peter Seeberger, both at the Max Planck Institute of Colloids and Interfaces in Potsdam, Germany, the system could be employed on molecular assembly lines. The system could enable rapid screening and development of new processes to make small molecules, such as most drugs, far quicker than is currently possible in times of medicine or chemical shortages.

‘This instrument represents the first truly universal synthesiser,’ says Gilmore. ‘By arranging a series of reactors radially about a central switching station, we can access whatever conditions are required, in any order, however many times we want.’

Gilmore explains the concept is a like a central train station that’s surrounded by six different destinations. ‘People enter, choose their destination, decide how long they stay, do what they need to do and then return home. They can then choose to return to that same place or go somewhere else,’ he says.

The main challenge, Gilmore says, was how to move reagents radially in a closed system while more reagents are added after each step. The answer lay in using nitrogen to push the solution along and having vents that can open and shut at different points in the system.

‘Once we achieved this, it opened up several new possibilities we had not envisioned, including the ability to seal off reactors so that a solution can react for as long as desired – something which is not possible in a traditional continuous flow process.’

To test the system, the researchers chose the anticonvulsant drug rufinamide as there are many ways to synthesise it. This allowed them to showcase how different pathways to a molecule can be screened sequentially and rapidly identify the best way to make a molecule.

Arriving at two different optimised pathways – a linear and a convergent route – they determined that the convergent route was best because it provided a higher yield using less solvent, while being easily isolated via spontaneous crystallisation.

‘This serves as an excellent example of how we can rapidly develop modular syntheses for pharmaceuticals, whose results can be readily applied to larger, dedicated reconfigurable platforms to synthesise medicines when needed,’ explains Gilmore. ‘This is of critical need globally, as every country is currently faced with medicine shortages due to trade and inflexible production.’

‘The radial concept has promise but I would hope to understand how this system can be adapted to be more accessible to others and the choice of flow means that it is hard to develop a universal programmable system,’ says automated synthesis researcher Lee Cronin, creator of the ‘Chemputer’ system at the University of Glasgow. ‘But notwithstanding this it is a very impressive feat of chemical engineering and it will be great to see where this is applied next.’

The researchers have patented the technology but have kept it freely accessible with instructions for anyone to build using commercially available equipment and open-source software. As well as pharmaceutical production, the team envisages it could provide a way to generate large pools of highly reproducible positive and negative data to feed to machine learning systems.

‘In the near future, what we envision is server farms for chemistry, where facilities are filled with hundreds of these automated platforms, where registered scientists can log in from anywhere in the world and perform standardised research on the same state-of-the-art equipment as anyone else in the world,’ says Gilmore.