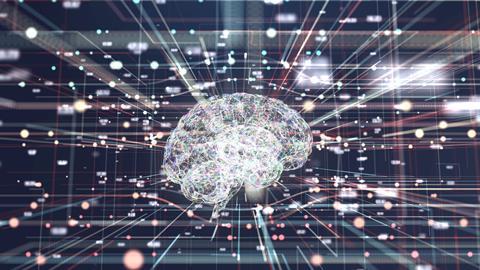 By combining machine learning, molecular dynamics simulations and experiments it has been possible to design antimicrobial peptides from scratch.1 The approach by researchers at IBM is an important advance in a field where data is scarce and trial-and-error design is expensive and slow.

Artificial intelligence (AI) tools are helpful in discovering new drugs. Payel Das from the IBM Thomas J Watson Research Centre in the US says that such methods can be broadly divided into two classes. ‘Forward design involves screening of peptide candidates using sequence–activity or structure–activity models, whereas the inverse approach considers targeted and de novo molecule design.’ IBM’s AI framework, which is formulated for the inverse design problem, outperforms other de novo strategies by almost 10%, she adds.

‘Within 48 days, this approach enabled us to identify, synthesise and experimentally test 20 novel AI-generated antimicrobial peptide candidates, two of which displayed high potency against diverse Gram-positive and Gram-negative pathogens, including multidrug-resistant Klebsiella pneumoniae, as well as a low propensity to induce drug resistance in Escherichia coli,’ explains Das.

The team first used a machine learning system called a deep generative autoencoder to capture information about different peptide sequences and then applied controlled latent attribute space sampling, a new computational method for generating peptide molecules with custom properties. This created a pool of 90,000 possible sequences. ‘We further screened those molecules using deep learning classifiers for additional key attributes such as toxicity and broad-spectrum activity,’ Das says. The researchers then carried out peptide–membrane binding simulations on the pre-screened candidates and finally selected 20 peptides, which were tested in lab experiments and in mice. Their studies indicated that the new peptides work by disrupting pathogen membranes.

‘The authors created an exciting way of producing new lead compounds, but they’re not the best compounds that have ever been made,’ says Robert Hancock from the University of British Columbia in Canada, who discovered other peptides with antimicrobial activity in 2009.2 Jenssen participated in that study too and agrees. ‘The identified sequences are novel and cover a new avenue of the classical chemical space, but to flag them as interesting from a drug development point of view, the activities need to be optimised.’

Das points out that IBM’s tool looks for new peptides from scratch and doesn’t depend on engineered input features. ‘This line of earlier work relies on the forward design problem, that is, screening of pre-defined peptide libraries designed using an existing antimicrobial sequence,’ she says.

Hancock agrees that this makes the new approach challenging. ‘The problem they were trying to solve was much more complex because we narrowed down to a modest number of amino acids whereas they just took anything that came up in nature,’ he says. ‘That could represent a significant advance, but the output at this stage isn’t optimal.’ Hancock adds that the strategy does find some good sequences to start with, so he thinks it could be combined with other methods to improve on those leads and come up with really good molecules.