Back to carbon black 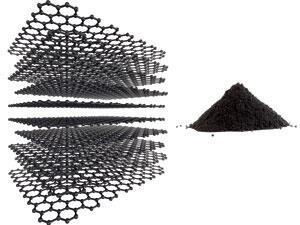 Scientists in Singapore have discovered the potential of a readily available material that could be used to replace expensive graphene analogues in a wide range of electrochemical processes.

Currently, there is no efficient method to prepare bulk quantities of pristine graphene, and electrochemical studies and applications have been limited to using chemically modified graphene analogues. One such analogue is thermally reduced graphene oxide (TRGO). TRGO is widely used as its properties are close to those of pristine graphene and the production process is simpler, but still time-consuming and costly.

Amorphous carbon (AC) is another allotrope of carbon and one type, carbon black, is cheaper and much easier to produce than TRGOs. The basic structure of carbon black is very similar to TRGOs, so Martin Pumera and colleagues at Nanyang Technological University studied the difference in properties using spectroscopic and electrochemistry techniques. Pumera says: ‘If there is not much difference, for many applications (including industrial applications), it can be more beneficial to use amorphous carbon than thermally reduced graphene.’

The team found that the electrochemical properties of AC and TRGO were very similar. TRGO provided no advantages over AC as an electrode material so could be replaced by AC with little loss of performance.

Andrew Minett at the University of Sydney, Australia, an expert in electrode materials, says that ‘these significant results suggest researchers should re-evaluate amorphous carbons for many electrochemical applications. Simpler and cheaper to make and already produced in large industrial quantities, amorphous carbons may make a reappearance in the academic world’.

Pumera’s team is now investigating the properties of graphene analogues produced by different methods. They aim to be able to link how production methods influence the final materials’ characteristics.