Scientists from South Korea have used bacterial viruses to turn pressure into electricity; a finding they hope could pave the way toward self-powered pacemakers and other implantable electronics. 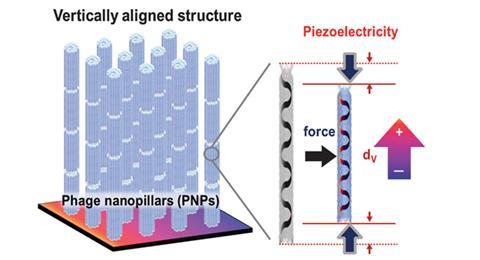 The device could overcome biocompatibility issues of implantable electronics

Piezoelectric generators convert mechanical energy into electrical energy. For applications in human implants, these generators must be made from non-toxic, biocompatible materials. To this end, Yoon-Hwae Hwang from the Pusan National University and co-workers successfully employed M13 bacteriophage nanopillars – formed by ejecting phages into a template – as building blocks to make nanogenerators. Similar to squashing a spring, applying a perpendicular load to the nanogenerators produced electricity. The vertical phage pillars in the device improved output voltage compared to a lateral alignment because of higher elasticity along the axial direction of the bacteriophage DNA.

The performance was improved by bioengineering. Substituting four negatively-charged glutamates for alanine on the phage genome increased the dipole moment of the protein, almost doubling the electrical output of the generator compared to the unaltered DNA. Tuning the generator further tripled the output and meant the bacterial nanogenerator could light up an LCD display with only pressure.