Cricket bats made from bamboo might help batters hit farther and faster, researchers have discovered. While willow has been the bat wood of choice for nearly 200 years, bamboo could deliver more energy to the ball during impact, though at the price of being much heavier. But bamboo’s fast growth could help make the sport more affordable to its rapidly growing fanbase.

Almost all high-end cricket bat willow comes from just two suppliers in England. The trees take around 15 years to mature, and bat makers often discard up to 30% of the wood due to imperfections.

Darshil Shah, former member of Thailand’s under-19 national cricket team, and his colleagues from the University of Cambridge, UK, decided to investigate bamboo as an alternative. Bamboo is cheap and grows in many countries that have seen increasing cricket participation – China, Japan and South America for example. The plant matures within six years and can produce several harvests without needing to be replanted. 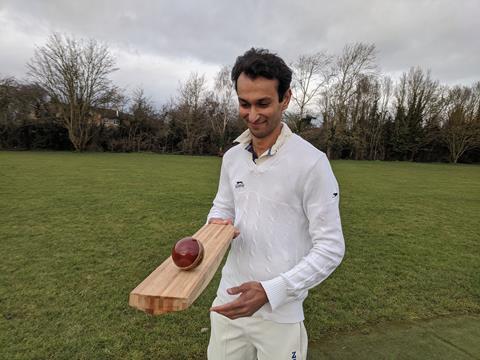 Working with cricket bat manufacturer Garrard & Flack, the team created a bat from bamboo strips held together with an adhesive. The bat turned out to be fairly heavy, since bamboo is denser than willow, lending itself to straight rather than cross strokes, Shah recounts. ‘But because it is stiffer, we can reduce the thickness of the blade, which will reduce the weight,’ he explains. His team was surprised to find that the bamboo bat also had a larger sweet spot, the area that transfers maximum energy onto the ball on impact.

‘The other important property is the sound of a bat,’ says Shah. Bamboo’s resonant frequencies are almost identical to willow’s, so players and spectators are unlikely to notice the difference.

The mechanical differences between the materials come down to cellular rather than molecular differences, says wood materials scientist Ingo Burgert from the Swiss Federal Institute of Technology, ETH Zurich. Both bamboo and willow contain cellulose, hemicellulose and lignin as their main structural components. But in trees, water and sugar transport take place in different tissue types. As a type of grass, there’s only one structure performing both functions in bamboo, Burgert explains. 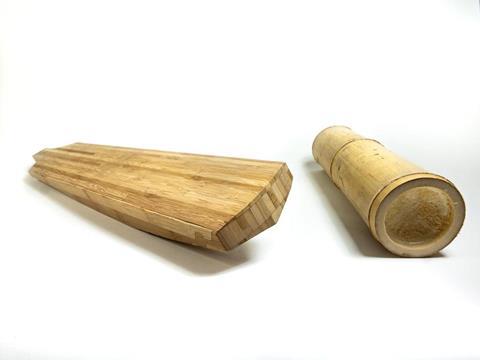 The current prototype is about 40% heavier than a traditional bat, because bamboo is denser

One way to get an idea of a bamboo’s potential is from children playing baseball with bamboo bats, says Philip Evans from the Wood Surface Science Lab at the University of British Columbia in Canada. ‘They mention that the bat is heavy, but they also say that the ball pings off well.’ However, unlike willow, bamboo doesn’t recover well from deformation and becomes dented more easily.

However, as a game steeped in tradition, cricket regulators have so far resisted changes to bat material and design. Since 1979, when Australian cricketer Dennis Lillee used an aluminium bat in a match against the English team, rules have only allowed for wooden blades in professional games. And no amount of science will convince cricketers if the bat doesn’t feel and handle right, Evans points out. ‘But if the work at the Cambridge group can put bats in the hands of young kids who have fun playing cricket then that’s great,’ he adds.

‘Certain uses, like cricket bats and musical instruments get associated with particular species to the point that people stop considering if any other species would work,’ says Dan Ridley-Ellis, head of the Centre Wood Science and Technology at Edinburgh Napier University in the UK. ‘But two bits of wood from one species can be as different – in terms of properties like density and stiffness – as two pieces of different species. It becomes increasingly important to look for alternatives, species and sources, to meet wood demand without costing too much financially or ecologically.’

Understanding bamboo’s properties, in particular its sound absorption behaviour, might also help Shah and his colleagues with their principal research: understanding how bamboo and engineered timber could be used in the construction sector.

Thank you to Neil Shearer and Martin Ansell for helpful comments.