Wood microfluidics carve out a niche 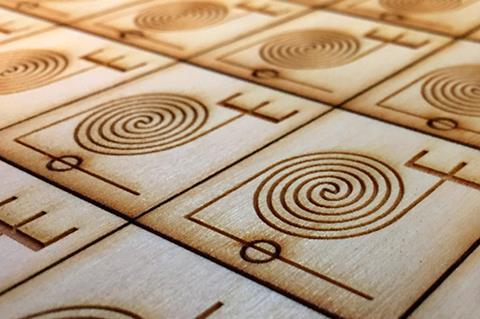 Proof-of-concept microfluidic devices have been made out of birch plywood. A laser cutter engraved channels in wood, which were then coated in polymer to counter wicking. When used for protein detection by surface plasmon coupled fluorescence enhancement, such a device performed as well as or better than a plastic counterpart. And another wooden device allowed for rapid detection of microbial cells so could be used for food safety. According to the researchers behind the devices, they are a step towards cost-effective and environmentally friendly methods for rapid protein protection for various diagnostic and therapeutic applications.

The notion of using wood started as a hallway conversation at the University of Maryland, Baltimore County (UMBC), recalls biochemical engineer Govind Rao, when he was admiring a wooden-faced watch worn by a colleague. In terms of cost, Rao thought that wood had the potential as a useful material for prototyping microfluidic devices.

‘Someone ran across to a local hardware store, got some samples of wooden flooring and we popped it into the laser cutter,’ says Rao. ‘Sure enough we were making fine channels in wood, an ah-ha moment.’ The initial idea was to create wooden analogues of prototypes, but the wooden system turned out to work just as well.

The Maryland group trialled various coatings such as poly(methyl methacrylate) and cellulose acetate, before opting for Teflon. They are now trying more environmentally benign materials, such as natural vegetable oils and bees wax.

Next, Rao aims to create more complex devices. ‘We have demonstrated here one and two layer devices, but there are architectures where you have multiple layers. Those would require fairly precise techniques to layer them and bond them together,’ he explains.

The properties of various woods offer an ‘untapped world of functionality,’ according to Rao. Charring the wood also created a carbonised surface, which ‘could be used for other functional group attachments. No pun intended, but we have just scratched the surface here,’ he says.

Chemical engineer Nathaniel Robinson, at Linköping University in Sweden, notes that many of the non-wood components are not biodegradable, and the reagents not environmentally friendly. ‘The solid remains from composted microfluidic devices would probably have to be handled as hazardous waste,’ he predicts. The lack of transparency also makes wood unsuitable for some analyses, adds Robinson. ‘For example, observations of cells or bacteria through a microscope typically require high-quality glass.’

While applauding the idea of wood-based diagnostics, biotechnologist Chris Lowe at the University of Cambridge, UK, says that substantial work will be required before clinical acceptance. He adds that ‘the chemical composition of birch is extremely variable’ and ‘this could be exacerbated by charring created by the laser etching and inconsistencies in the Teflon-coating procedure.’

Even in mild aqueous medium, ‘birch wood releases a variety of sugars, amino acids and aromatic compounds, which could influence clinical assays,’ Lowe warns. Nonetheless, ‘these difficulties in ensuring reproducibility in creating devices out of natural products like wood should not stem enthusiasm,’ particularly if biodegradable materials could replace materials like Teflon.

As for potential use in clinical devices, Rao says it’s a ‘highly regulated industry, everyone wants to be second,’ but he remains optimistic that others would follow once one company demonstrated success with wood.