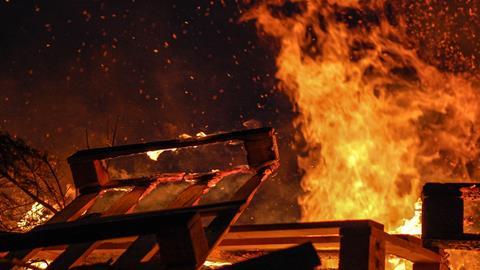 A fire-retardant structural material can be made by chemically softening and compressing wood to remove the spaces between cell walls. When burnt, the resulting material forms a protective char layer on its outside which helps preserve its internal strength.

The use of wood in structural applications is limited by both its inherent flammability and susceptibility to rapid collapse on burning. Wood can be made more fire-proof by chemical treatments – such as through injections of halogenated flame retardants, or coatings of inorganic nanoparticles – but these approaches are typically either prohibitively expensive, fail environmental and health standards, or result in insufficient structural strength.

Liangbing Hu and colleagues of the University of Maryland in the US show that their process to create bullet-proof wood through densification (see video) also confers fire-resistant properties without recourse to potentially toxic or environmentally-unfriendly materials.

The researchers found that, when burnt, the modified structure causes a dense, insulating char layer to form on the material’s surface. Together, these properties can double the material’s ignition time and decrease its maximum heat release rate by more than a third.

Not only does the freshly-pressed material have three-and-a-half times the compressive strength of regular wood, Hu says, but ‘the densified wood also shows more than 82-fold enhancement in compressive strength compared with natural wood after exposure to flame for 90 seconds’. If used for construction, he adds, the treated wood ‘could effectively prevent the collapse and destruction of wooden structures and gain precious rescue time when a fire occurs’.

Richard Hull, a fire science researcher from the University of Central Lancashire who was not involved in this study, sounds a note of scepticism, however, commenting that as lignin is the least flammable component of wood, delignification is an unusual strategy to make wood more fire-retardant. ‘The modest flammability improvements derive from the increased density and reduced porosity, but such could also be achieved using cheaper char-forming inorganic additives,’ Hull notes. He adds that alongside the process costs, the fact that wood is sold by volume means that densification will push up the material’s price.