A way of turning natural wood into an ultra-dense material that is strong enough to stop a bullet has been developed by scientists in the US. The team behind it say it could be used as an eco-friendly yet high performance building material, or even as a new kind of body armour.

‘Our process enables the complete collapse of the voids and pits in natural wood, thus substantially reducing defects and leading to a significantly higher strength,’ says Liangbing Hu at the University of Maryland, US, who developed the ‘densified’ wood together with colleagues.

Their two-step process involves first boiling the wood in a mixture of sodium hydroxide and sodium sulfite to partially break down two major structural components – lignin and hemicellulose. Then the wood is mechanically pressed at 100°C, which squashes it into a dense layer of well-aligned cellulose nanofibres held together with hydrogen bonds. The process reduces the thickness by 80% but makes it 10 times tougher than natural wood. ‘The densified wood is as strong as steel, but six to seven times lighter, leading to a specific strength higher than almost all metals and alloys, even the lightweight titanium alloy,’ says Hu. 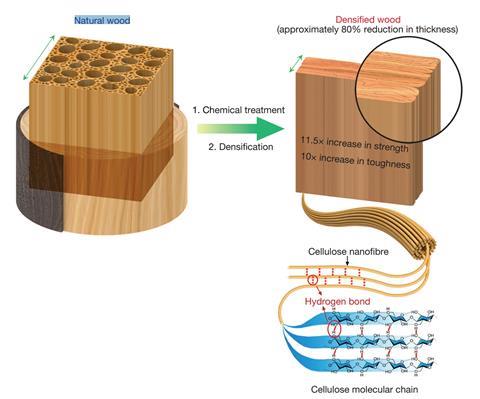 The team also used a home-made ballistic tester to show that a barrier made of five layers of densified wood was capable of trapping a bullet on its way through. Wooden armour may be a step too far, but the team say their material may find use in lightweight vehicles, eco-friendly buildings and ‘advanced’ furniture though.

Dan Ridley-Ellis, head of the Centre for Wood Science and Technology at Edinburgh Napier University, UK, says the idea of densified wood has been around for a while, and it may have interesting applications as a construction material. ‘It’s certainly not going to replace wooden joists or wall elements, because they’ve decreased the dimensions, but I can see it being used as a reinforcing element,’ he says.

One major advantage of Hu and colleagues’ method, he says, is that it can be used on any type of wood, so it could potentially allow less in-demand species to be used. ‘It may stretch what we can do with wood. It depends on the economics of it,’ he concludes.

Carmen Mihaela Popescu, a polymer chemist who works on wood treatments at the Petru Poni Institute of Macromolecular Chemistry in Romania, says that more research is needed to characterise this kind of material. She agrees that its uses will depend on the cost of producing it commercially.