Batteries reveal all after dip in hot butter 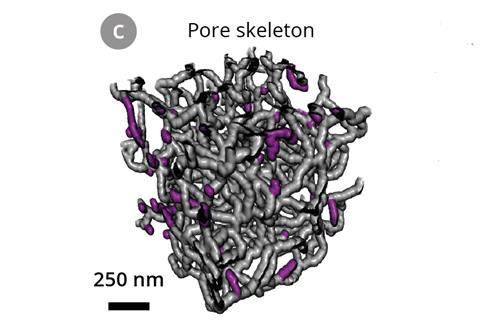 A 3D rendering of a lithium–ion battery’s pore structure was created with the help of melted butter. Dead-end pores, which make batteries slower to discharge, are marked in magenta

Buttering-up batteries is the novel answer scientists in Switzerland came up with to take unprecedentedly high resolution pictures of a critical component of lithium–ion batteries. Butter poured into the battery provided an excellent way to make a cast of the ins and outs of a battery’s pores and could help to find new ways to improve them.

‘Current lithium ion batteries don’t charge or discharge as fast as we’d like for applications like electric vehicles,’ explains senior author Vanessa Wood at ETH Zurich. Many battery advances to date have relied on trial and error engineering, but there is now more focus on understanding internal structure.

Separators are polymer membranes that keep the positive and negative layers of a battery from touching, while allowing lithium ions to flow between them. Ideally, the lithium ions should flow freely and quickly. However, separators have been largely unchanged for the past 50 years, notes Wood. ‘We think there is room for improvements.’

What’s needed is better insights into separators’ structure. Around 70% of a lithium–ion battery is solid and the other 30% is porous space filled with a liquid electrolyte which the lithium ions flow through. The Swiss team removed the electrolyte and placed the separator into melted, shop-bought butter, which then seeped into its pores and hardened.

‘What’s nice about butter is that it pours as a liquid at relatively low temperatures, then hardens at room temperature,’ says Wood. ‘Whether solid or liquid, it stays pretty much at the same volume, so it doesn’t distort the fine structural features of the separator.’ A beam of gallium ions cut away 10nm thick slices of the separator infilled with butter. As each slice was removed, a scanning electron microscope recorded an image of the newly exposed polymer surface, allowing a 3D reconstruction of the separator.

The team found that 13% of all junctions through the separator led to a dead end. These do not contribute to lithium ion flow during battery charging and discharging.

‘This paper tells us what the limiting factors are in separator performance,’ says Billy Wu, a battery researcher at Imperial College London, UK. ‘In this case it is not about increasing porosity. It is about knowing how well the pores are connected together.’ He adds: ‘We want to be able to fast charge our electric vehicles and accelerate much better. In order to do that we need to optimise the structure of the materials that we have. That means making it easier for the lithium ions to move back and forth between the anode and cathode.’

Wood stresses the importance of having a method to see the separator structure in 3D. ‘To charge batteries fast, without having to worry about degrading them, it is about creating super highways where lithium ions can move unobstructed from one side of the battery to the other,’ she explains. The challenge now is to come up with ways to improve separators, in ways that are not too pricey and suitable for high-volume battery manufacturing.