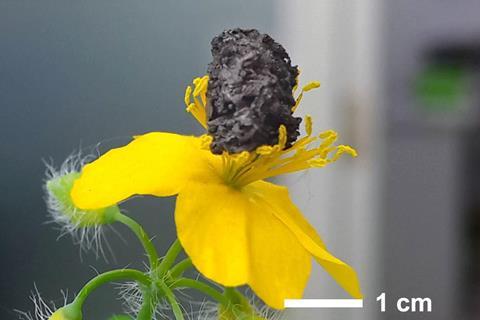 The nanoporous nickel–gold cathode is ultralight, preserving the main advantage of lithium–oxygen batteries: a high energy to weight ratio

A porous metal electrode so light that it can be balanced on a flower could help unlock the potential of lithium–oxygen batteries. With a theoretical energy density close to that of petrol, this type of battery could one day power electric cars.

However, lithium–oxygen batteries still suffer from low efficiency and durability. Reactive lithium oxides and peroxides created in the electrochemical reaction breakdown the cathode, which is often made out of carbon. As a result, lithium carbonate and other compounds accumulate in the battery and eventually stop it from working.

Xin-Bo Zhang and his team from the Chinese Academy of Sciences have now discovered that replacing the carbon with a spongy nickel–gold cathode can address these issues. The feather-light metal is immune to reactive lithium compounds even after 286 charge-discharge cycles. Moreover, it boosts the battery’s performance to rival that of commercial lithium–ion systems.

While metal cathodes have been used in the past, they are so heavy they negate lithium–oxygen battery’s biggest advantage – that they have a high energy density for their weight. Zhang’s cathode consists of ultra-light nickel foam covered with a sheet of nanoporous nickel. Since nickel can’t catalyse the battery’s electrochemical reaction, gold is deposited on the cathode surface to form a thin layer of gold–nickel alloy.

The researchers are now working on further increasing the battery’s performance to eventually realise the technology’s full potential.