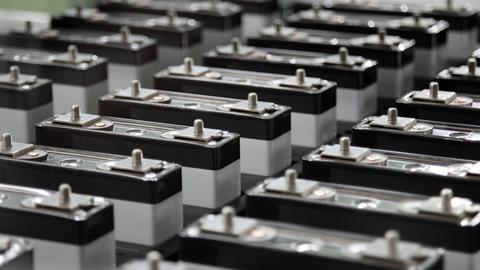 At four years old, the laptop on which I’m writing this would probably be considered middle-aged. It’s beginning to show: it takes longer to start, the screen anti-reflection coating has patches of wear, and the clever lithium-ion battery (LIB) that keeps my laptop alive now barely lasts a morning without connecting to the mains. As I hover the mouse cursor over the system icons a warning sign pops into view reminds me of the battery’s condition: ‘replace soon’.

Batteries are everywhere, quietly doing their thing, keeping our digital, mobile and ever-connected world running. Usually they only get our attention when they’re running flat or filling headlines after bursting into flames – but they’re poised to make an even bigger impact on our lives as we tackle the transition towards a lower carbon economy and gradually wean ourselves off fossil fuels and oil.

The worldwide battery market is predicted to grow to $77.4 billion (£60.4 billion) by 2024 as utility-scale energy storage expands. The transport sector will make up a large market share, and electric or hybrid vehicles are now an increasingly common sight whirring up and down the roads of many developed countries. The battery landscape of the 21st century will be unrecognisable from that we know now, and industrial nations are rapidly positioning themselves in order to not be left behind. The starting gun in the UK was fired in April, with the announcement of a four-year investment round for electric vehicle batteries christened the Faraday Challenge and worth £246 million.

The Faraday Challenge forms a key strand in the UK Government’s Industrial Strategy Challenge Fund, with the aim to provide financial support for key industrial sectors. Its announcement was followed in July with a plan to ban the sale of new conventional diesel and petrol cars by 2040 and a ruling for all UK cars to be zero emission by 2050. Clearly, the Government believes batteries will be big for Britain and there’s little doubt the next few years will see the biggest restructuring of UK vehicle manufacturing and transport infrastructure in over 60 years.

On paper, the Faraday Challenge sounds good. It aims to deliver a coordinated programme of competitions to harness the UK’s scientific expertise in battery research and channel it into addressing industrial challenges in the electric vehicle industry. The competitions are broadly grouped under three themes: research and training to support world-class blue sky research; innovation and development, whereby the most promising battery ideas are nurtured and moved closer to market; and scale-up to develop industrial capabilities, with the goal of launching new battery technologies into the market (and, no doubt, reap the economic benefits) quickly. This sort of joined-up thinking is all too rare and resurrects an old policy of strategic Government investment in applied research, something which has been out of favour in the UK since the early 1980s.

The first phase of funding, led by the EPSRC and worth £45 million, was announced by business secretary Greg Clark in a speech in Birmingham – a city synonymous for over a century with UK car manufacturing. The initial goal is to create a virtual ‘battery institute’, a research hub to encourage the collaborative projects between researchers and facilities to position the UK as ‘a world leader in the design, development, and manufacture of electric batteries’.

The numbers are big and the ambitions are high, but despite the UK’s strong research strengths, we will be playing catch up against the big battery players. Already, 2017 has seen over $1 billion in venture capital and private equity funding invested in battery storage, energy efficiency and smart grid technologies worldwide. Over $400 million has been invested in a single Li-ion battery maker, Microvast Power Systems, alone. Tesla’s massive Gigafactory in Nevada is poised to become the world’s largest battery factory by 2018. Nearer to home, in March 2016 Daimler announced a €500 million (£461 million) investment to build a new 40,000 m2 Li-ion battery factory in Germany. This comes on top of an earlier €100 million investment in its existing battery production facility nearby. Together China, Japan, and South Korea make up around 85% of Li-ion battery production capacity for utility storage and electric vehicles and have established material and production supply chains. In the UK it’s a sad tale, often repeated, of missed chances in exploiting our scientific knowledge base to bring discoveries to market. It was John Goodenough (see p76), Phil Wiseman, Koichi Mizushima and Phil Jones at Oxford who developed the lithium cobalt oxide cathode in the 1970s – but it was Sony in Japan who made Li-ion batteries a commercial success.

However, all is not lost for the UK. The electric vehicle battery sector is relatively young and the UK can still play a major role in transforming it. Li-ion batteries have advanced sluggishly since the early 1990s. This is because the materials challenges in batteries are complex – when one aspect of their chemistry is improved, others can be compromised. It’s a finely tuned balance and the slow, steady iterative improvements in energy density and lifetimes within existing Li-ion batteries is favoured by the big battery players with many years of investment behind them.

This is an opportunity for the UK to explore and nurture novel battery chemistries: foam batteries, sodium–sulfur, metal–air, lithium–silicon and flow batteries. Perhaps we can chance upon a high energy density, lightweight, low cost battery which meets our strict safety requirements. With proper coordinated support from the lab to full-scale development and production, the UK can take its rightful place on the battery stage. As Michael Faraday himself said: ‘But still try, for who knows what is possible.’