UK scientists have shown exactly why a mutant version of the deadly bird flu virus H5N1 becomes resistant to the drug oseltamivir - marketed as Tamiflu. The mutant remains susceptible to a second drug, zanamivir (Relenza), leading the researchers to suggest that both drugs should be stockpiled in preparation for a possible pandemic of the disease. At the moment, governments worldwide are stockpiling only oseltamivir because it can be made cheaply in pill-form, while zanamivir is inhaled.

Both drugs work in the same way by blocking an enzyme, neuraminidase, on the protein coat of the avian influenza virus H5N1. After the virus has replicated within an infected cell, it needs to cut off a type of sugar molecule - sialic acid - on the surface of the cell to escape. Neuraminidase snips off this residue, helping to release the new-born virus from the cell and allowing it to spread the infection.

Both oseltamivir and zanamivir closely resemble sialic acid, and tightly bind in the active site of the neuraminidase, preventing it from acting on its natural substrate. However, one rare strain of mutant virus is resistant to oseltamivir but not zanamivir, something that has puzzled researchers. 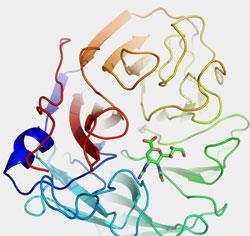 Now Steven Gamblin and his co-workers at the National Institute for Medical Research in London and the University of St Andrews have taken molecular snapshots of the enzyme using x-ray crystallography to show why one drug continues to be effective while the other does not.

’One main difference between the two antivirals is that oseltamivir has a hydrophobic pentyloxy moiety where sialic acid has a glycerol,’ Gamblin says. ’By contrast zanamivir has the same glycerol as sialic acid.’

In the normal or wild-type viral neuraminidase this quirk of oseltamivir can be accommodated by the enzyme’s active site - the active site makes a small adjustment to allow the inhibitor access. However, the mutant protein has a single amino acid substituted in the active site - a histidine residue is replaced by tyrosine. This is sufficient to reduce the binding strength of oseltamivir by 250-fold. Zanamivir, on the other hand, resembles sialic acid much more closely and can still block the active site of the mutant enzyme.

’Mutations arising which have a selection advantage are very quickly exploited [by the virus],’ Gamblin says. ’Our study suggests that stockpiling a single drug, oseltamivir, might not be sufficient if we are faced with a pandemic.’

Angie Lackenby of the UK government’s Health Protection Agency says, ’This study brings together the structural effects and the enzymatic impact of key mutations in the neuraminidase of H5N1 viruses an understanding of which is essential for further rational drug design. This work highlights the need to review the stockpiling of oseltamivir alone for pandemic preparedness while confirming that zanamivir remains a viable option.’