Blue LEDs may be caught in a trap

Manufacturing difficulties could be down to nitrogen vacancies 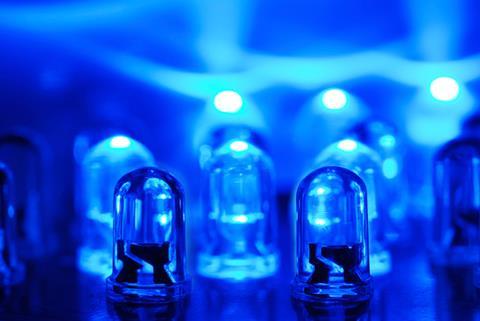 Nitrogen vacancies may be to blame for manufacturing difficulties

Blue LEDs are notoriously difficult to make, which has slowed down the production of cheap, highly efficient white LED light bulbs. Now, UK scientists think they know why. They have discovered that one of the key ingredients to create the semiconductor sandwich for blue LEDs, magnesium, may be behind the manufacturing problems. Their work could help to develop new manufacturing strategies to overcome this problem, driving down the cost of white LED lights.

Blue LEDs won their inventor’s last year’s physics Nobel prize and they have been heralded as the next step in solid state lighting. Combining them with red and green LEDs, which are simpler to make, they can be used to create exceptionally efficient white lighting. However, manufacturing problems have persisted and blue LEDs are still much more expensive than their red and green counterparts.

‘It’s difficult to produce p-type gallium nitride,’ says John Buckeridge, from University College London (UCL), UK, whose group carried out the research. A p-type semiconductor is a material rich in positive charge carriers or holes, whereas negative charges make up the opposing n-type semiconductor. In an LED, these two materials are sandwiched together and, when a voltage is applied across it, an electron and hole will meet at the junction, with a photon being emitted.

To make the p-type variant it has to be doped with magnesium to build up the number of free moving holes. Buckeridge explains that you would expect each magnesium atom replacing a gallium atom to donate one extra charge carrier but this simply is not the case. ‘You need to put in a lot of magnesium to see any type of p-type activation at all [in gallium nitride],’ he says. ‘[It’s] technologically challenging because you are near the solubility limit.’

To find out why this happens, Buckeridge and his colleagues at UCL applied advanced multiscale computational modelling to the problem – an approach that was honoured with the 2013 chemistry Nobel prize.

‘You substitute a gallium atom for a magnesium one,’ Buckeridge explains. ‘You treat that and a surrounding area of 100 atoms with a quantum level of theory.’ Around this, you assume another 20,000 atoms behave classically, only being able to respond to the presence of charge defects. Under this set up, they were only able to model very small amounts of magnesium relative to the amount required for p-type activation.

The team found that magnesium is its own worst enemy. ‘[The] magnesium substituting for the gallium acts as a very deep trap for the hole it produces,’ argues Buckeridge. ‘The amount of energy it would take to free that would be so much that you would end up melting the gallium nitride.’

But even if you were able to liberate the hole from the magnesium trap it still would not be able to meet an electron as it would be energetically favourable for it to knock out a nitrogen atom. This leaves a vacancy, which traps the hole.

It still remains unclear why there is any p-type activation in gallium nitride using a magnesium dopant but the research may help explain why manufacturers have to use such a high amount of it to get a small number of positive charge carriers flowing through the material.

Buckeridge hopes the technique will allow researchers to ‘pinpoint design strategies … that reduce this trapping energy’. He acknowledges, however, that more research will have to be done to determine what happens when you add a significant amount of magnesium and reach p-type activation.

Christian Kisielowski from the Lawrence Berkeley National Lab, US, agrees that a greater understanding of what happens at higher magnesium concentrations is needed. ‘This [research] deals with dilute defect concentrations that are not used for doping of devices,’ Kisielowski tells Chemistry World. ‘It may have no impact on the doping of gallium nitride.’