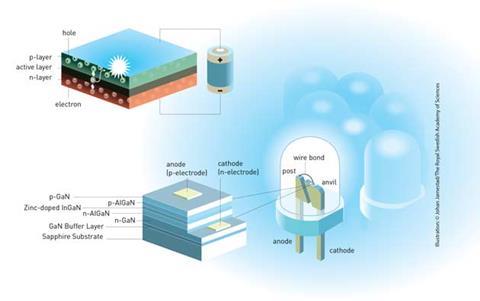 Blue LEDs were first created in the 1990s, decades after red and green ones, and have led to more efficient lighting

The 2014 Nobel prize in physics has been awarded to Isamu Akasaki and Hiroshi Amano, of Nagoya University, Japan, and Shuji Nakamura of the University of California, Santa Barbara, US, for ‘the invention of efficient blue light emitting diodes (LED) which has enabled bright and energy saving white light sources’.

The trio contributed to the development of the elusive blue light emitting diode in the 1990s, which was crucial to the invention of white LED lamps. ‘Thanks to the blue LED we can now get white light sources that are very energy efficient with very long lifetimes,’ said Per Delsing, chairman of the physics Nobel committee, speaking at the press conference in Stockholm. ‘This LED technology is now replacing older technologies.’

In the early 1990s Akasaki and Amano, working with Nakamura, who was then at a small company called Nichia Chemicals, succeeded in creating gallium nitride semiconductors that emit blue light. Green and red LEDs had been developed decades earlier in the 1950s and 1960s, but producing a blue version proved to be far more difficult, and it took another three decades to develop high quality gallium nitride crystals with the right optical properties.

The laureates’ work made it possible to create white light sources – either by mixing the outputs of blue, red and green LEDs, or by exciting a phosphor material with a blue LED to generate green and red light.

Speaking by phone at the announcement, Nakamura – who had been woken at 3am local time – said the news was ‘unbelievable’. The trio will share a prize of SEK8 million (£700,000).

Colin Humphreys, who works on new materials for LEDs at the University of Cambridge in the UK, says all three laureates have done ‘tremendous’ work well worthy of the prize. ‘LEDs have already begun to replace lights around the world, and I think they will eventually be the dominant form of lighting,’ he tells Chemistry World.

‘The development of gallium nitride LEDs is turning into a multibillion dollar industry,’ adds Humphreys’ colleague Rachel Oliver. ‘The work carried out by Akasaki, Amano and Nakamura is absolutely foundational to the field – our group would not exist if these guys hadn’t produced the first devices.’

‘With 20% of the world’s electricity used for lighting, it’s been calculated that optimal use of LED lighting could reduce this to 4%,’ said Frances Saunders, president of the Institute of Physics (IOP). ‘It’s wonderful that the Nobel Foundation have chosen to commend these three physicists’ work.’