Plant-derived plastic shows the benefits of BPA without the toxicity

In response to the controversy surrounding bisphenol A (BPA), chemists in the US have synthesised a safer, green alternative based on lignin – the structural component of plant cell walls that is generated as a by-product during papermaking. Their compound has similar mechanical properties to BPA, without showing endocrine disrupting effects.

BPA is ubiquitous in modern life; found in clear plastics, epoxy resins that line food tins, adhesives and receipt paper. But its use is becoming increasingly controversial, with many studies suggesting it can act as an endocrine disruptor, mimicking the hormone oestrogen. Virtually everybody comes into contact with BPA on a daily basis, and there is mixed evidence on the potentially harmful effects of this exposure. In 2012 the US Food and Drug Administration banned it for use in baby bottles, and the French government has said by 2015 its use in all food packaging will be banned.

Now, Richard Wool and colleagues at the University of Delaware have synthesised a green, non-toxic alternative to BPA called bisguaiacol-F (BGF). They used derivatives of lignin, a heavily aromatic natural polymer that is readily available from plant material. ‘We wanted to use a renewable feedstock to make monomers, and focus on natural resources,’ says Kaleigh Reno, a PhD student who worked on the project. Speaking at the 247th ACS National Meeting & Exposition in Dallas, US, she explained that over 70 million tonnes of lignin are produced each year as a by-product of the paper industry, most of which ends up being incinerated. Finding ways to turn this into plastics, she says, can both cut waste and reduce dependence on oil. 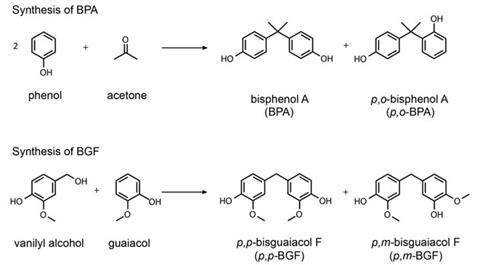 BGF is structurally similar to BPA, with two hydroxyphenyl groups. It is synthesised by reacting two lignin breakdown products, vanilyl alcohol and guaiacol. Reno and her colleagues showed that BGF-based polymers have similar thermal stability and mechanical strength to BPA-based ones. But BGF is also sufficiently different to BPA not to cause endocrine disrupting effects. ‘We have decreased the structural similarity to [oestrogen] compared with BPA,’ Reno explains, ‘and decreasing the hydrophobic nature of the centre of the material also decreases the binding affinity to oestrogen receptors.’

Wool and Reno say their process could easily be scaled up, and estimate the first BGF-based plastics will be market-ready in 2–5 years.

‘This is potentially a really nice example of recycling.’ says Linda Birnbaum, director of the US National Institute of Environmental Health Sciences. But she warns that more advanced toxicity tests need to be carried out on the new materials to make sure they actually are safer than BPA. ‘We really need evidence that they won’t cause harm,’ she says. ‘At the moment the information is very limited.’