Burgers with a side of fluorescent nanomaterials 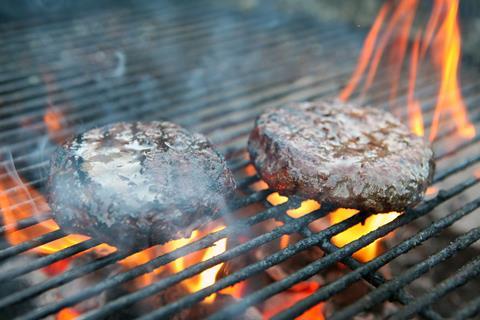 Scientists in China have found carbon dots on grilled hamburgers.

Intensively heating meat generates toxins such as benzene or polyaromatic hydrocarbons, which increase a person’s risk of developing cancer. Mingqian Tan, from Dalian Polytechnic University, wanted to find out whether heterocyclic amines, which are present in these types of toxins, react any further at the high temperatures typically found in barbecues to form carbon dots.

‘Scientists are aware of the presence of harmful toxins produced during food processing; however, our knowledge about their overall formation and potential toxicity is still insufficient,’ says Tan. ‘Carbon dots are harmful to human health due to their unique nano-effects, including their small size, high reactivity and phototoxic effects. We believe that these properties can cause damage to DNA and the cellular membranes,’ he adds.

The group grilled beef patties at 220, 260 and 300°C. The standard barbecue cooking temperature for red meat is around 220°C and the burgers cooked at 260 and 300°C had more charred bits, suggesting they were overcooked. Carbon dots formed on all of the burgers and the higher the temperature, the smaller the carbon dots. Studies on mice cells showed that the smaller carbon dots were more toxic than the larger ones.

‘This is a perfect example of reverse thinking,’ says Meikun Fan, a professor in the Department of Environmental Science and Engineering at Southwest Jiaotong University in China, who was not involved in the study. ‘Nano-carbon materials have been derived from several natural resources, such as grass, trees and even fruits; but few people have considered the long- and short-term health effects they may have in our food.’

However, don’t let these findings keep you from enjoying barbecue food this summer. Tan offers some simple steps for consumers to minimise any health risks: ‘Don’t put your burgers on a very hot grill, don’t overcook your burgers, and remove the charred part from your burgers before you eat them; all of this will reduce the formation of carbon dots.’

Next, Tan is hoping to answer questions such as ‘how do carbon dots affect the taste of a burger?’.