Cadmium cyanide surprises chemists by shrinking when irradiated with x-rays

While most known materials expand upon x-ray irradiation, cadmium cyanide contracts, new research shows. The researchers behind the work say the phenomenon, called negative x-ray expansion, could lead to radiation being used as a design tool for functional inorganic materials.

X-ray induced volume expansion is a well-established concept in protein crystallography, and an important consideration when studying radiation damage. However, a growing number of examples indicate the opposite is true for some inorganic materials. 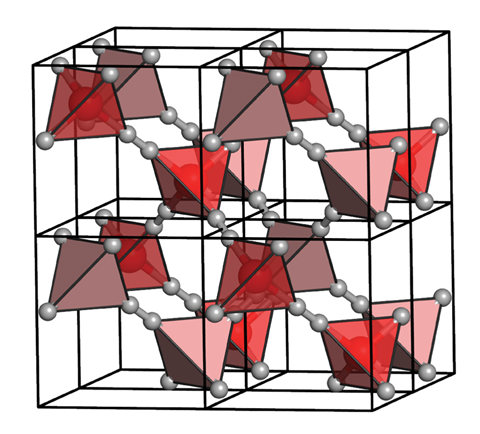 Cadmium cyanide is a flexible cubic coordination polymer and is already known to contract when heated. Now, a team around Chloe Coates, who is based at the University of Cambridge, UK, has shown that cadmium cyanide undergoes a unit cell contraction that is independent of thermal factors when it is irradiated with x-rays.

The team has not established exactly why cadmium cyanide exhibits negative x-ray expansion. ‘Cadmium cyanide is quite unusual in that it has got a very simple average structure, but it has this correlated disorder where locally the coordination of cyanide around the cadmium is determined by ice rules,’ says Coates. ‘What that means is you have many configurations of cadmium cyanide, so you don’t have a single ordered ground state. I think that’s probably very important.’

However, the team has confirmed the x-ray induced structural effects are separate from thermal factors. ‘The phenomenon of x-ray induced contraction of Cd(CN)2 neatly explains discrepancies in its reported coefficient of thermal expansion,’ comments Vanessa Peterson, an expert in x-ray characterisation methods at the Australian Nuclear Science and Technology Organisation. ‘I look forward to learning the mechanism that the researchers determine.’

Increased knowledge of material–x-ray interactions may open doors for researchers to use x-rays as a design tool to access new phases of inorganic materials, which could enhance their properties for a wide range of applications such as lithography or memory devices. In addition, understanding negative x-ray expansion may provide a baseline to quantify x-ray damage, or x-ray induced effects in different types of everyday materials.

‘There are certain battery materials that are particularly sensitive to x-rays,’ Coates says. ‘If you take your laptop, and you put it through an x-ray scanner at an airport, is that going to affect your battery?’

‘I had never thought about x-ray exposure for any material leading to contraction,’ comments Angus Wilkinson, an expert on negative thermal expansion materials at Georgia Institute of Technology in the US. ‘That they could actually get different phases at low temperature, depending on x-ray exposure was definitely a shock to me, and a very nice result, a fun study to read. In a sense, it kept me on the edge of my seat because I was thinking “how general is this? Is this going to be a problem in other systems?” I think one of the major takeaways from this is that people need to think more about what x-ray exposure might be doing, and how it actually might change the outcome of an experiment.’