Mustard gas and sarin precursors broken down on US navy ship, while progress is made with other weapon chemicals 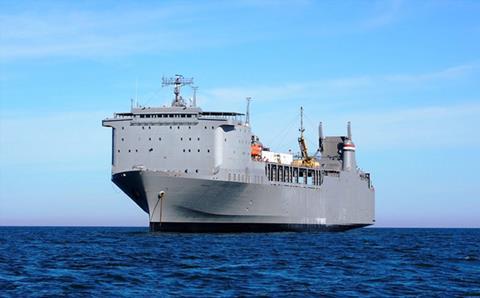 The destruction of the most dangerous chemicals in Syria’s declared chemical weapons arsenal is now complete. This comes just under a year after the nerve gas sarin was used to kill an estimated 1500 civilians in a Damascus suburb on 21 August 2013. This act resulted in the Syrian government – under intense intentional pressure – declaring their stockpiles to the world’s chemical weapons watchdog and an unprecedented rapid destruction plan being put in place.

Two mobile hydrolysis systems onboard the US navy ship Cape Ray were the key players in this global destruction effort. Earlier this week it was announced that the Cape Ray had finished and that 581 tonnes of the sarin precursor methylphosphonyl difluoride, better known as DF, and 19.8 tonnes of sulfur mustard - the only ‘read to use’ weapon in the Syrian stockpile - had been chemically neutralised.

This took approximately six weeks, significantly faster than the US had predicted. ‘I am very proud of the team of civilian employees who volunteered for this mission and who worked so diligently to ensure the safe destruction of these chemical warfare materials,’ says Joseph Wienand, director the Edgewood Chemical Biological Center where these hydrolysis systems were developed. ‘They did what no one else could do - using their experience and innovative technology to destroy these Syrian chemical warfare materials while on a ship at sea.’

The DF was broken down in water to methyl phosphonic acid and hydrogen fluoride, while the sulfur mustard was broken down in hot water to hydrochloric acid and thiodiglycol. This process generates more than 10 times the volume of effluent than there was chemical warfare agent. ‘The effluents resulting from DF and mustard hydrolysis onboard the Cape Ray is now stored in designated ISO tanks,’ says Dominique Anelli, head of the chemical demilitarisation branch of the weapons watchdog the Organisation for the Prohibition of Chemical Weapons. The Cape Ray will now sail to Finland and Germany to drop off the effluents for incineration.

Incineration of all of the other high priority declared chemicals, the precursors to the nerve gases VX and VM, at commercial facilities in the UK and Finland is also complete. Meanwhile, destruction of the raw materials to make weapon agents and precursors, which make up the bulk of the chemicals declared by Syria, at the Finish incinerator and another Veolia incinerator in the US has now reached about the halfway stage, says Anelli.

The only chemical left that will not be incinerated is 6 tonnes of hydrogen fluoride that was originally destined for the US but, due to unexpected changes to shipping schedules, was delivered to the UK instead. The UK does not have an incinerator capable of burning HF, so it will be chemically neutralised by chemical company Mexichem in Runcorn, says Anelli. ‘Mexichem is a company that produces HF and they know how to deal with it safely,’ he explains.

‘It will be destroyed by neutralisation with calcium hydroxide to form calcium fluoride, a naturally occurring mineral which is used in the cement industry,’ adds an official from the UK’s Ministry of Defence, who has been involved in managing the UK’s contribution to the destruction of Syrian chemical weapons. ‘In this case it will be disposed of by landfill.’