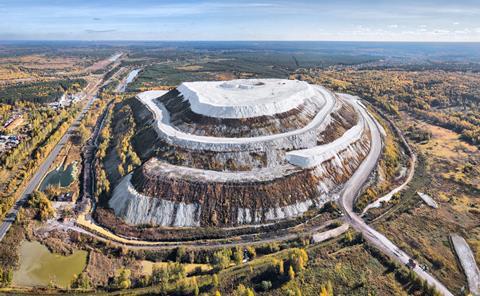 For every ton of phosphate fertiliser, about 5.5 tons of phosphogypsum waste is created

Phosphogypsum is a common byproduct of industry – all over the world, large stacks of the chalky white substance tower in fields, or are dumped into the ocean. This is a result of the 300 million tons of the stuff that the fertiliser industry makes every year when it produces of phosphoric acid. While gypsum – the basis of plasterboard and an essential component of cement – is high in demand, phosphogypsum is unusable, meaning these stacks will continue to grow in size. Overall, the waste mounds are projected to reach a total of 7–8 billion tons worldwide by 2025.

Not only are these stacks unsightly, they can damage the environment – phosphogypsum is radioactive and contains fluorides, sulfates and heavy metals. The toxic water from these stacks can occasionally leak into the surrounding environment, and harms marine life when dumped into seas. However, because of a company called Carbon Cycle, that could be about to change.

Carbon Cycle was set up in 2009 and focuses on producing clean, usable gypsum from phosphogypsum waste. You might be thinking, ‘I know what the carbon cycle is, and it has nothing to do with that.’ And you’d be right: the company’s name is a hangover from their roots, having been named after their original conception as a business aiming to commercialise carbon capture.

‘Basically, we designed a process that was catching carbon dioxide by sequestering it into chalk,’ says Ian Thaxter, the company’s commercial director. By capturing carbon dioxide using a mixture of ammonia and gypsum, the team created ammonium sulfate, a fertiliser, and calcium carbonate, a chalk that can fetch a good price when pure. The idea was to sell the chalk and fertiliser to finance the carbon dioxide capture.

After receiving a grant from the UK Department of Energy and Climate Change for £330k to build a 24-metre long, 5-metre high test unit to collect information, the team went forward with a design study to figure out how much a plant would cost to run. They hit upon a couple of problems. Firstly, the gypsum coming in was contaminated, and those impurities ended up in the final chalk. ‘The value of the chalk is only there if it’s clean chalk,’ says Thaxter. Where pure chalk (which can be used as white filler) might fetch £250 per ton, impure chalk isn’t good for much more than throwing on the land. On top of that, it quickly became clear how much capital it was going to take to set up and run the plant. ‘Financially, it was looking a bit rocky,’ says Thaxter.

Gypsum, before and after purification

It was here that the team took the first steps to arriving at their current process. ‘We had this problem of, “how do we get from dirty gypsum to clean gypsum?”. We hadn’t viewed that as being a big issue – we thought “someone must have done that before”,’ says Thaxter. So, the company hired some external experts. ‘We would give them 10kg of material, and they’d give us back what they had cleaned up, and the material that they cleaned up was a fraction of what we sent them, and what they gave us wasn’t very clean either,’ explains Thaxter. ‘That posed a big problem to us, so we started doing our own work.’ It was during that work that the team stumbled across their invention – a chemical process for cleaning gypsum and chalk. ‘That changed our business,’ adds Thaxter.

In with the old, out with the news

The new process takes waste gypsum or chalk and purifies it so that it can be used as high-grade white filler in plasterboard and cement. Firstly, impure gypsum is placed into a solution of ammonium sulfate around 90–100°C, together they form a complex. This complex sinks into the solution, releasing any impurities in the gypsum. Filtering the complex from the hot solution and placing it into colder water sees it revert to ammonia sulfate solution and pure gypsum. The company claims that purifying phosphogypsum through this process could meet the world’s entire demand for gypsum. 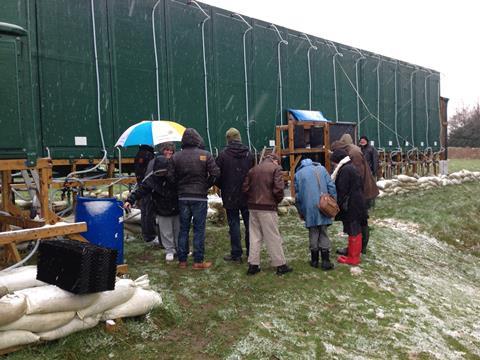 The original carbon capture test unit, funded by the department of energy and climate change

And it’s not just chalk and gypsum – a small percentage of phosphogypsum contains rare-earth metals like neodymium and praseodymium, which can also be extracted. The company claims purified phosphogypsum could provide 70% of the world’s rare earth supply. At present, China corners around 95% of that market, with rare-earths in increasing demand for generators in wind turbines and electric motors in cars.

So, what’s next? In the medium term, the company plans to licence their process to phosphoric acid producers by linking up with their partners, Prayon Technologies, a phosphoric acid technology provider. ‘They’re basically our sales, marketing and delivery arm,’ explains Thaxter. Producers of fertiliser can bolt on Carbon Cycle’s process to their own facilities to purify their own waste gypsum and sell the result on to manufacturers. To that end, they’re aiming to have a pilot plant up and running by early 2020. ‘There’s a massive issue caused by phosphogypsum, and what we’re doing in enabling those gypsums to be recycled is an important thing for the world,’ says Thaxter. ‘Fertiliser is unfortunately a necessary evil, and this enables that fertiliser to continue to be produced.’