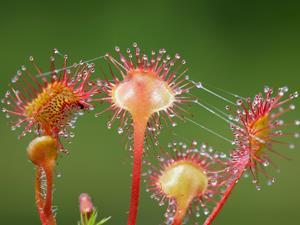 The adhesive used by carnivorous sundew plants to trap insects may one day find use as a cell-friendly scaffold in tissue engineering, researchers in the US have shown. The properties of the material have previously been exploited in the pharmaceutical and food industry without being properly understood, but new structural and chemical analysis suggests more uses and points the way towards synthetically produced bio-inspired mimics.

Sundews (Drosera sp.) obtain nitrogen and phosphorus from insects, trapping them with a bioadhesive secreted by glands on their leaves. Researchers have previously observed that the adhesive is biocompatible and highly viscoelastic, but until now its composition has remained a mystery.

Nanotechnologist Mingjun Zhang and colleagues at Ohio State University extracted the adhesive from laboratory-grown sundew plants, and tested the composition by x-ray photoelectron spectroscopy and atomic force microscopy. They found that, while the adhesive is almost 96% water – explaining its biocompatibility – it contains a highly regular network of polysaccharide chains crosslinked by calcium and magnesium ions. This explains the material's high elasticity, which enables it to trap insects, and which they reasoned could make it an ideal scaffold for growing tissue.

The team cultured several types of mouse cell involved in bone, muscle and vascular regeneration. They observed no cytotoxicity, finding that the cells grew as well on the sundew adhesive as on the bare cover slip, and adhered much better. This suggests sundew adhesive could make an ideal flexible scaffold for directing the assembly of bulk tissue structures. 'You could have cells embedded in this material and potentially they would grow, differentiate, integrate and become part of an organ or tissue,' says Zhang.

Molecular biologist Ingo Grunwald of Fraunhofer Institute for Manufacturing Technology and Advanced Materials in Germany agrees that the glue’s properties are impressive, but says it would be difficult to gain regulatory approval to insert a plant extract into the human body. 'There is no cytotoxicity, which is the most important thing,' he says. 'But then you have to fulfil other things – that you can ensure the production is always the same and so on, and this could be the biggest problem. But the work also describes the composition of the adhesive, and from that you can try to design biomimetic sugar- or carbohydrate-based adhesives.'

The researchers are now working on making synthetic analogues, and have made some progress, but Zhang admits it is proving difficult to ‘mimic the complexity of nature’.