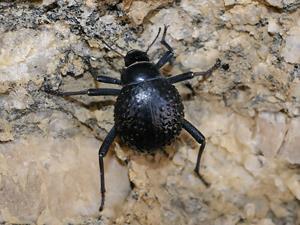 The Namib Desert beetle survives by collecting moisture from the air

Inspired by both desert beetles and marine mussels, scientists in Saudi Arabia have devised a new method for creating micropatterned superhydrophobic surfaces that efficiently harvest fog.

In semi-arid, desert regions, particularly in coastal areas where morning fog is abundant and rainfall is scarce, fog harvesting can be a crucial source of water. Indeed, the Namib Desert beetle is known to survive by collecting water from fog thanks to its unique back structure. An array of hydrophilic bumps across a waxy superhydrophobic surface collect then route droplets into the beetle’s mouth.

This clever coat has been widely mimicked; however, previous techniques to make superhydrophobic surfaces with a micropattern of hydrophilic spots have relied on expensive, multistep and inefficient lithographic mask-based strategies. Now, Peng Wang and coworkers from the King Abdullah University of Science and Technology have designed an elegant inkjet printing strategy that can continuously produce these surfaces on a large scale. 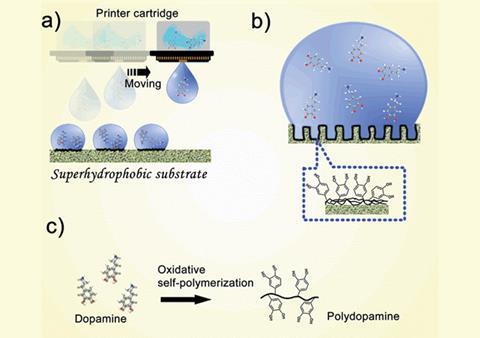 ‘Due to the challenge of combining hydrophobic species with hydrophilic ones, such a surface is very difficult to make,’ says Wang. Once again looking to nature, the team were inspired by marine mussels, which, owing to a polydopamine bioadhesive, can stick to almost any variety of surface. The team focused on introducing superhydrophilic polydopamine spots onto superhydrophobic surfaces to create micropatterned surfaces. However, as this requires addition of an aqueous dopamine precursor solution onto a hydrophobic surface, this is a difficult challenge in itself. ‘Our secret ingredient is the use of two solvents: ethanol and ethylene glycol. Ethanol reduces the surface tension of the aqueous dopamine solution, whilst ethylene glycol lowers its vapour pressure. This causes the dopamine solution to be stable on the surface, allowing for its complete self-polymerisation into polydopamine,’ explains Wang. 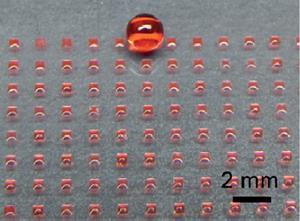 Mimicking the pattern found on the back of the Namib Desert beetle, the team printed their tailored dopamine solution onto a superhydrophobic surface and achieved a micropatterned surface with a water collection efficiency of ~61.8 mg cm2 h-1.

‘This method is one-step, mask-free and versatile, and it allows for the direct patterning of a variety of superhydrophobic surfaces,’ explains Zhiguang Guo, a materials scientists at the Lanzhou Institute of Chemical Physics in China.  Polymer scientist Junqi Sun from Jilin University in China agrees: ‘I can envision that with this convenient inkjet-printing strategy, the optimisation and fabrication of wetting patterns for many other applications could be largely facilitated.’

In addition to scaling-up the procedure, Wang and coworkers are now working towards optimising the shapes and sizes of the hydrophilic patterns to further improve the water collection efficiency of the surface.