Hope and expectation surround the chemical industry’s increasing adoption of biotechnological manufacturing – but today, their lengthy development times and complex processes mean frustration is a major by-product. ‘The process of developing industrial biomanufacturing [IB] processes is broken,’ warns Sean Ward, founder and chief technology officer at bioengineering firm Synthace, in London, UK. ‘It costs too much and it takes too long.’ He cites a Lux Research analysis from June that estimates that it currently takes on average 7.4 years to bring an IB process to full scale. 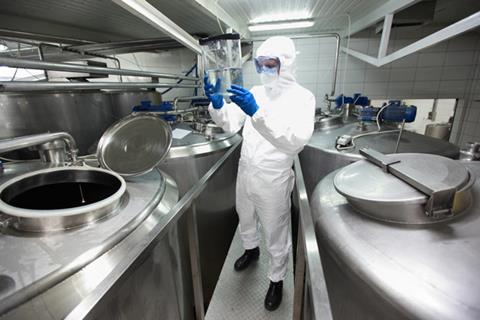 Governments, scientific institutions and companies are therefore acting to help industrial biomanufacturing streamline commercialisation and capitalise on its promise. A roadmap produced in March by the US National Academy of Sciences (NAS) is already influencing planners domestically and internationally. Meanwhile the UK’s approach to assist the technology across the ‘valley of death’ to market has evolved since it adopted ‘synthetic biology’ as one of its ‘eight great technologies’.

The NAS report estimates that bio-based product markets were already worth $353 billion in 2012, more than 2.2 percent of US gross domestic product. That encompasses pharmaceutical, bulk and fine chemical manufacturing, underlines report committee chair Thomas Connelly, who was formerly chief innovation officer of chemicals giant DuPont. ‘Companies such as BASF, DuPont, and DSM are heavily using bio-based manufacturing techniques in many processes,’ adds Connelly.

Good progress has been made in pharmaceutical biomanufacturing, notes Rob Noel, business and new technologies development manager at fluid management equipment supplier Pall Life Sciences in Portsmouth, UK. Changes in the cells used to express proteins have boosted biological drug production capacity, he emphasises. ‘Over the last 5–10 years, manufacturing titres have increased tenfold to around 10–20 grams per litre.’

Nevertheless, the US Department of Energy (DOE) and National Science Foundation (NSF) commissioned the NAS report to ‘accelerate biological production of chemicals and also to create a roadmap to that future’. The roadmap details goals ranging from better feedstock availability and ‘pre-processing’, to development of a wider range of useable organisms and improved enzyme design.

Industrial biotechnology cross-cuts fuels, chemicals, materials, polymers, medicines, but you need engagement in each of those sectors

Connelly explains that the recommendations also asked the DOE, NSF and other US agencies to support these goals, and establish an ongoing roadmapping mechanism. ‘We’ve received comments from US government stakeholders that they are using elements of the report in their programme planning,’ he says. ‘We have also heard from the Organisation for Economic Co-operation and Development (OECD) Science and Technology working group that they are considering aspects of the report for the 2016 OECD agenda.’

In the UK, the Centre for Process Innovation (CPI) Industrial Biotechnology and Biorefining unit serves as a key hub for activities in this area. Its fermenters and other services help companies develop, test and validate processes, addressing what remains a key challenge in IB, explains Steven Pearson, the unit’s business and strategy manager. ‘The UK is strong on R&D, but we can do better in commercialisation,’ Pearson explains. ‘Improving skills in process development and scale-up for IB processes and products will help.’

Making the transition to commercial production is particularly unpredictable in biomanufacturing. ‘The theme behind the NAS report is what technologies and innovations can tame the masses of unknowns that arise every time people transfer between scales,’ notes Ward.  That challenge provides an opportunity for Synthace ‘to fix what’s so fundamentally broken’, he admits. ‘We investigate the whole context of a biomanufacturing process, including organism genetics, the reactors and the separations. That’s only become possible in recent years, from much better computational models, massive increases in the amount of data that we can collect, and falls in the cost of this kind of work.’

Since the UK adopted the eight great technologies in 2013, the CPI has shifted focus from exploiting its physical biomanufacturing capabilities to knowledge sharing. ‘We understand the challenges better now, it’s more about the interdisciplinary science and technology necessary to get products to market for the benefit of the UK,’ Pearson explained. This effort is directed by connecting together industry leadership, so company managers can discuss what’s needed. ‘That’s important because industrial biotechnology cross-cuts fuels, chemicals, materials, polymers, medicines, but you need engagement in each of those sectors,’ Pearson says. ‘Each sector needs to understand what industrial biotech can give to overcome sector-specific challenges or capitalise on opportunities.’

Another of IB’s most important challenges is feedstock identification and pre-processing. Pearson explains that the most common raw material, biomass from crops, can bring problems of supply chain security and seasonal variability affecting process robustness and cost. Using gases like syngas produced from waste is therefore a serious alternative candidate, he suggests. ‘If we can improve the productivity of microorganisms using gas, it removes many of the problems to do with biomass and seasonal variation.’

An important opportunity arises from the higher concentrations now possible, which enables manufacturing in smaller facilities, explains Noel. Pall helps this by providing flexibility in the form of disposable equipment. ‘You can remove flow paths and within days be operating another manufacturing process,’ Noel says.

Rather than scale-up, flexible small batch manufacturing allows scale-out, where companies install multiple production systems, which Ward notes is one of two visions for IB. The other is promoted by organisations like BASF, which regularly asks what the biorefinery equivalent of its highly-integrated city-sized ‘Verbund’ factories would look like. Ward prefers the scale-out route, influenced by naturally-occurring biofactories. ‘You see forests more commonly than giant trees,’ he underlines.