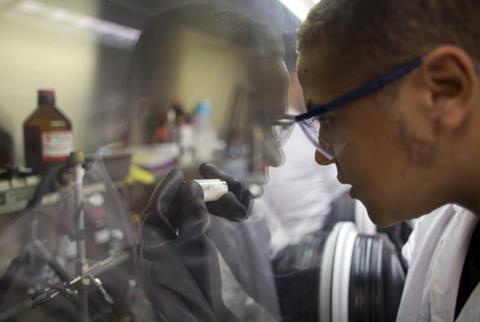 The gloves come off? The wax capsule could end glovebox work for some reactions

Many laboratories are littered with half-used reagent bottles that have long outlived their usefulness. But scientists in the US now have a solution to end the build-up of chemical waste with a wax capsule that can protect reagents from the atmosphere.1 Each wax capsule can be made up with just enough reagents for a single reaction and can simply be dropped into a solvent ready to start a synthesis. The capsule has the added advantage that air-sensitive reactions can be carried out without the need of a glovebox.

Moisture and air present difficulties for synthetic chemists who deal with extremely sensitive reagents on a daily basis. Large reagent bottles, that are usually surplus to requirements, are often left in cupboards or on lab benches, with the slow ingress of moisture and air spoiling the contents. Researchers end up having to purchase new stock, rather than reusing the old, which leads to a process that isn’t cost-effective or efficient.

The sensitivity issue also forces chemists to use preventative measures that may limit a synthesis’ practicality, as Aaron Sather from the Massachusetts Institute of Technology (MIT) discovered during his organic synthesis research. ‘I was working on carbon–fluorine bond formation and you take an aryl halide and you transform it into an aryl fluoride,’ he explains. ‘One of the caveats about this reaction is you have to [do] it in the glovebox as the palladium pre-catalysts are sensitive to oxygen.’ Sather also had to contend with moisture-sensitive fluoride salts.

To address this pervasive problem, Sather and his colleagues initially looked at the work of Douglass Taber from the University of Delaware, US. Taber, along with Christopher Nelson, developed a method for preserving potassium hydride by introducing it into a molten paraffin wax.2 As the wax solidified, the hydride was uniformly dispersed throughout the inert waxy matrix, protecting the contents from the atmosphere.

Taber was able to recover the potassium hydride for use in later syntheses and noted that the reagent concentration was the same after leaving the wax out for four months.

Extending this technique to other reagents, the team at MIT found the waxy matrix concept to be initially quite problematic. ‘Caesium fluoride is the thing we tried it with  – it’s a lot more dense than potassium hydride – and as the wax cooled all of the reagent sunk to the bottom,’ says Sather. ‘If you cut off a piece, we didn’t know how much caesium fluoride was in there.’

The team questioned whether, rather than placing a reagent into a wax matrix, you could surround it in the form of a wax capsule. Sather and his colleagues produced hollow paraffin shells and filled them with all of the ingredients necessary to perform a series of palladium-catalysed carbon–fluorine, carbon–nitrogen and carbon–carbon reactions without a glove box.  In particular, the team focused its attention on the nucleophilic fluorination of aryl triflates and bromides.

Injecting the necessary palladium catalyst, caesium fluoride salt and supporting ligand into the paraffin capsule, the researchers added it to a reaction tube with a toluene or cyclohexane solvent. Once heated, the wax melts, releasing the reactants into the solvent to allow the reaction to proceed. The wax is easily removed via precipitation, filtration and column chromatography.

Such a small innovation may have a large impact on R&D in synthesis laboratories, according to Sather. ‘Our mind is on the user every time, [if] we develop something we want other people to use it too,’ he says. Sander also argues that the wax capsule will enable scientists to pick one off the shelf with the correct quantities and ingredients needed for a chemical transformation, saving on the waste brought about by ordering unnecessary quantities of reagent.

Taber, whose work on waxy matrices inspired Sather and his colleagues, acknowledges the MIT chemists’ further work in this area and is interested to see where this will lead in chemical screening. ‘These will be particularly useful for the rapid screening of ligand/metal combinations toward optimising a desired transformation.’