Chiral benzyne made with single handedness for the first time 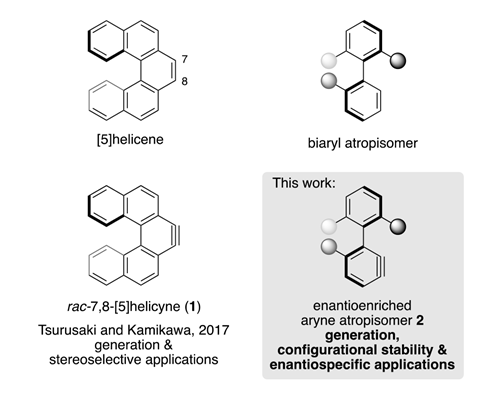 The first axially chiral benzyne – a highly reactive aromatic ring with an additional bond – has been made by chemists in France. The team proved that the atropisomeric aryne retains its stereochemical information in Diels–Alder cycloaddition reactions and can be used to create chiral polycyclic aromatic hydrocarbons including small nanographene molecules.

Arynes or benzynes are aromatic rings that have two substituents removed, leaving the system with two extra electrons – a situation that makes them strained and energetically unhappy, and therefore extremely reactive. They attack nucleophiles, alkenes and even react with themselves. In textbooks, benzynes are often depicted as benzenes with a triple bond. But atomic resolution images captured only a few years ago show that a cumulene-type structure with three consecutive double bonds is actually closer to reality.

So far all arynes bar one – derived from a helicene – have been flat, non-chiral species. But even the helicyne was only reported as a racemic mix. Now, researchers have made the first almost enantiopure benzyne. The molecule is an atropisomer, meaning its axial chirality comes from hindered rotation around a single bond.

The benzyne precursors, bearing substituents that can then be removed to generate the reactive species, were made in two steps in up to 92% enantiomeric excess from biaryl lactones. With a computed racemisation half life of 58 hours at room temperature, the benzyne preserves its enantiomeric excess in cycloadditions with furans and pyrroles. However, the products are formed as a 1:1 mix of the two possible diastereomers, indicating that the benzyne’s chirality is unable to control this aspect of the reaction.

When reacted with perylene, the benzyne produces a small chiral nanographene. It can also be used to make unusual chiral triptycenes, anthracenes and other large polycyclic aromatic hydrocarbons with an axial chiral structure.