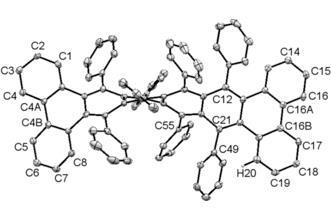 The fight for title of most twisted molecule is a harsh one: only last year 170°-twisted decatwistacene managed to surpass its predecessor’s torsion angle by 26°. But now a hexacene with a 184° end-to-end twist has dethroned decatwistacene.

Twenty years ago, the hexacene’s twist angle was predicted to be 178°. But because making long molecules comprising fused aromatic units is tough, this was never experimentally confirmed. Only after Kathleen Kilway from the University of Missouri-Kansas City and her team tackled the synthesis did they find that the hexacene has an even larger twist.

Rather than following an established synthesis that relies on benzyne chemistry, Kilway and colleagues used a central benzoquinone unit and sequentially added fused benzene rings. The quinone unit was reduced with tin to make the fully aromatic hexacene.

The twisted molecules are more than a mere academic oddity. Like other helical structures, they are chiral and they possess compelling optical properties that might be useful for materials applications.

Kilway’s team calculated that the next bigger twistacene – a molecule with seven fused benzene rings – should have a torsion angle of 220°. They wrote that ‘given our synthetic methodology, [it] may not be quite as difficult to obtain as one may think’.