As the lines between the digital world and our physical lives become increasingly blurred, the amount of data we deal with is exploding. With that in mind, the importance of fast and reliable data transfer has never been more clear. But all of that demand places stress on whatever has to handle it. Data centres, where data is now being processed in the Zettabytes – that’s 1021 – have to constantly be looking ahead.

To that end, there has been a move away from conventional electronics to optical data transmission. One of the most crucial components of that comes in the form of photonic integrated circuits. The idea being that you can take all of the technology that has been developed for electronics (the ability to pattern things at the nanoscale, for example) and use that to make waveguides, components that allow you to transmit light across the surface of a chip in much the same way a wire would. One of the simplest photonic integrated circuits is the transceiver, which allows optical data to be received, while encoding and transmitting data using a laser. 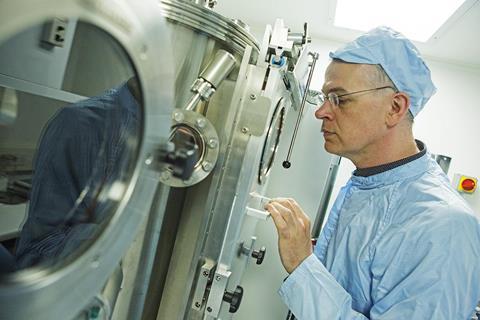 Founder and director of Chromosol William Gillin working in the lab

While several years ago you might have had an optical cable coming into a data centre, with everything else being done electronically, high data rates means that’s no longer feasible. That leads to a demand of millions and millions of transceivers. But the problem with transceivers is silicon can be used to make the whole device – except for the laser component. ‘Because silicon is an indirect bandgap semiconductor, it doesn’t emit light. There’s been 30 years of work trying to solve this problem,’ says William Gillin, founder and director of Chromosol – a young company which hopes to solve the problem. All of the current lasers being used are made of materials based on gallium arsenide – but problems remain when it comes to integrating those lasers onto silicon chips at scale. ‘This has limited the development of photonics – it’s still a huge industry, but it has limited how quickly it can expand,’ explains Gillin.

Chromosol arose from Gillin’s research over the last 20 years at Queen Mary University of London in the UK. After complexing fluorinated ligands with zinc, Gillin and Peter Wyatt, a colleague at Queen Mary, realised they had stumbled upon an excellent organic semiconductor capable of absorbing light. To integrate a laser onto a chip, Gillin and Wyatt had the idea of taking this semiconductor and combining it with molecules containing erbium – which amplifies light signals – to create a composite film. They found it worked fantastically and patented it. ‘Chromosol is commercialising this organic technology, which we can then deposit directly onto the chips in a really simple way. And that allows us to build our lasers directly onto silicon chips,’ explains Gillin.

On top of that, Chromosol’s technology can amplify weaker signals. Just as transistors in conventional electronics take in a tiny electrical current at one end and produce a much larger current at the other, Chromosol’s technology achieves ‘optical gain’. ‘We basically have the equivalent of a transistor amplifier built onto these chips – that allows us to make photonic integrated circuits much more complicated, expanding the applications they can address,’ says Gillin. 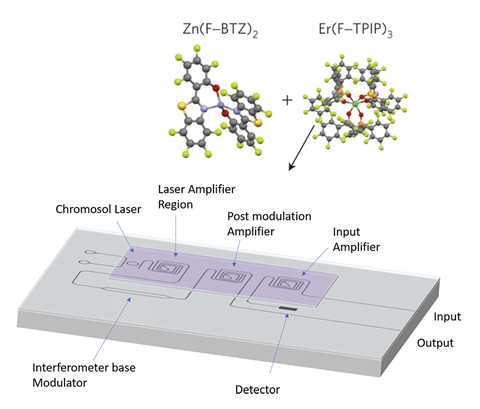 Optical amplifiers are currently used in the industry for things like telecommunications – optical cables that go under the Atlantic ocean, for instance, will have to have their signals optically boosted at several points. ‘You want to do it without having to convert the signal from optics to electronics, because that would be a disaster for the data rates,’ says Paul May, Chromosol’s chairman. The problem with that technology is that you need several metres of fibre to get sufficient amplification – and that doesn’t easily translate onto a silicon chip. ‘What Chromosol has done is created a two-component system – a chromophore material, which absorbs light,’ explains May. ‘That’s one part of the organic material, and it’s co-evaporated with another material, which contains the erbium.’ The system is simple to deposit onto a chip.

The company is now in the process of fabricating the chips and demonstrating the systems potential. ‘We’ve started to demonstrate very solid gains,’ says May. ‘We’re in the process of starting the next stage of measurements where we’re hoping to show even better gains, and most interestingly, show lasing on the chip.’ The team aims to license this technology to transceiver manufacturers in the next year or two. ‘There might also be some niche areas where it would be interesting for us to do our own production,’ says May. ‘For instance, fibre optic gyroscopes on a chip, the kind of thing you might put on a smartphone. There’s nothing out there that can do that in a fully integrated way.’

Their work, so far, seems to be paying off. In 2020, Chromosol won the enabling technologies category of the Royal Society of Chemistry’s Emerging Technologies Competition, affording them recognition and an extra £40,000 in funding. ‘It was really nice to get the award – that’s really helped support outsourcing the chip fabrication,’ says May. ‘Fabrication runs that will provide us with say, hundreds of chips, each of those costs at least £20,000. So, the £40,000 from the RSC you could regard as funding two of those and each of those is a three-month development cycle for us.’

Origin: Spin out from Queen Mary University of London