Clouds on the horizon for UK science 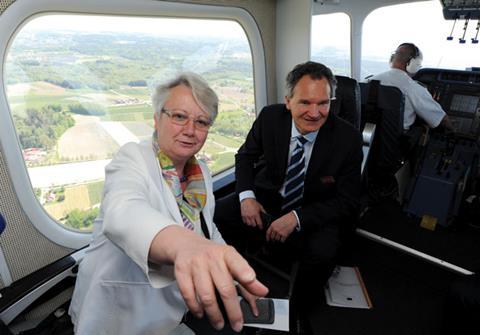 The UK needs to up its game to keep up with the rest of the continent when it comes to science, Europe’s research chief has said. Speaking at the UK launch of Horizon 2020 – the EU’s flagship research and innovation fund – Robert-Jan Smits, director general of research and innovation at the European commission, warned that despite its excellent performance in previous European research funding rounds, the UK faces some key challenges. He says that foremost among these is a skills shortage that sees the country patching the holes with foreign talent.

Speaking to Chemistry World, Smits said: ‘The UK has a great science base. It’s a country with top universities and excellent researchers … and that’s why the UK attracts a lot of foreign students and top researchers from around the world.’ However, he added that there were warning signs that all was not well. ‘Public spending on research is below the EU average and you are facing skills shortages in certain areas.’

Figures from 2010 show that, on average, EU countries invest 2% of their GDP in research and development, whereas the UK is only at 1.77%. Leading spenders on R&D in the EU, such as Germany, Sweden and Finland, invest more than 3% of GDP. Given that the UK government has put science and innovation at the heart of its long-term growth strategy for the country, the flat cash settlement agreed in the spending review may damage the UK’s competitiveness, Smits said.

The freezing of the science budget, unsurprisingly, concerns the president of the Royal Society, Paul Nurse, too. He acknowledges the troubled economic times, but warns that inflation will eat away the UK’s science base over time. ‘When we see the recovery in the economy,’ Nurse says, ‘I very much expect, and indeed will argue, for the losses that we see from inflation recovered and to see significant increases above that, given the importance that science has in innovation, the economy and the public good.’

Smits points to education as another issue that the UK needs to address, pointing to the latest Programme for International Student Assessment – Pisa – test results in mathematics as a cause for concern. The UK’s standing in international rankings for mathematical ability remained static, while in science the country slipped further down the table.

‘I think the most worrying for me in the UK is the whole skills shortage thing,’ he says, adding that the UK is too dependent on immigrants to cover the deficits in the country’s skills base. European Research Council (ERC) figures show that the UK has the most non-nationals receiving grants of any European country, more than double that of Germany, the next biggest ‘importer’ of foreign talent.

Nurse agrees with Smits on the need to nurture domestic talent. ‘We have to be attractive to foreign nationals – and indeed we are,’ he says. ‘But we have to grow talent at home and that starts with education. We can always do better at education… –and I do think it is taken seriously by our government - but I don’t think we always think carefully or hard enough about the best way to deliver it.’

Funding on the Horizon

Despite being hampered by a lack of funding, Smits notes that the UK punches above its weight in research. He mentions the oft cited statistic that 13.4% of the country’s science and technology publications are found in the top 10% most cited worldwide. While the UK’s science base faces a number of challenges, Smits still expects the UK to win a significant amount of money from Horizon 2020.

The recently agreed Horizon 2020 programme is the successor to the EU’s Seventh Framework Programme (FP7) and has a budget of €79 billion (€66 billion) – more than 30% higher in real terms than its predecessor. The programme is a key plank of Europe’s answer to the economic crisis that has gripped the bloc since 2009. Horizon is divided into three main ‘priorities’ – excellent science, industrial leadership and societal challenges, which will be receiving €24.4 billion, €17 billion and €30 billion, respectively.

The main funding battleground for UK academics will be in the excellent science portion of Horizon’s budget. Excellent science will provide €13 billion of grants for frontier research within the best teams. It is here that the UK has historically performed well, winning the most combined grants in the last five years of all the countries involved. The UK secured almost 1000 of these grants, while its next nearest competitor Germany notched up only 600. Given the UK’s past success in FP7, Máire Geoghegan-Quinn, European commissioner for research, innovation and science, says that she expects the nation’s scientists and businesses to win up to €2 billion over the next two years.

Horizon is also putting a great deal of money into small and medium enterprises (SMEs), with 20% of the €30 billion societal challenges fund earmarked for SMEs. Smits says to take full advantage of this the UK will need to step out of its traditional comfort zone of pharmaceuticals and aerospace, and boost innovation across the business sector. Business spending on R&D was just over 1% of GDP in the UK in 2010. This compares unfavourably with more than 2% of GDP in Europe’s most innovative countries. ‘I think your companies are investing in research but a bottleneck is the knowledge transfer from academia to industry,’ Smits says.