Spare a penny for your polymers 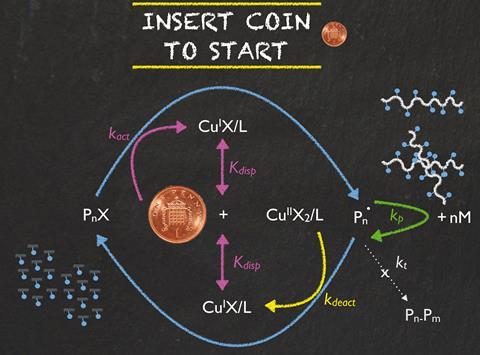 Scientists in the UK have discovered that a one-penny coin can catalyse polymerisations. The penny not only made the reaction start faster than the commonly used copper wire catalyst, but could also produce up to 50g of polymer in one batch.

Single electron transfer living radical polymerisation is one of the most used reactions to produce everyday polymers such as polystyrene and acrylics. Polymerisation reactions need a catalyst to get them started – copper wire being the most common one. However, pure copper’s high cost can be restrictive.

Now, a team led by Remzi Becer at Queen Mary University of London, UK, has made polyacrylates using a copper coin instead of copper wire as the catalyst – and it doesn’t even cost them a penny. Simon Harrisson, an expert in copper-mediated polymerisations from the Université Paul Sabatier, France, says that ‘one might be tempted to quibble that at current copper prices of around $2.1/lb (£0.3/g), this is a bit expensive. But the authors show that the coin is undamaged by the polymerisation, and could therefore be spent afterwards, so the catalyst is effectively free.’

Becer’s team found that they could polymerise different acrylate monomers with a copper coin, and compared the results with the same reaction using pure copper wire with the same surface area. Unlike with the wire, the reaction with the coin had no induction period, meaning it started immediately after adding the catalyst. Becer considers that ‘dropping in the coin to start the reaction provides better experimental conditions, which reduces the induction time’, compared to the copper wire, which floats in the reaction solution. Both the pre-1992 one penny coins, containing 97% copper, and the post-1992 ones, containing only 6% copper, gave identical results as the outer coating of the two coins is identical.

Becer hopes that copper coins can also catalyse other types of polymerisations and make larger batches of polymers. In particular, he would like to ‘upscale the reaction to get even more polymer, even kilos, using just one penny.’