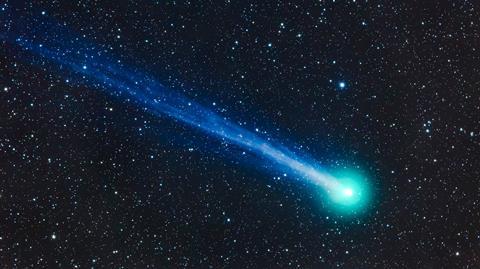 The first experiments to directly observe dicarbon’s destruction under sunlight have illuminated the mechanism by which some comets gain a green ‘halo’ while their tail remains colourless.

If you ask stargazers what is the most exciting thing to look at this month, they might well be pointing to a faint blob in the early morning or late evening sky – this is comet Leonard aka the 2021 Christmas comet. When it made its closest approach to Earth on 12 December, it was bright enough to be spotted without equipment. Some may have even spotted its fuzzy green coma, the nebulous envelope made from sublimating material surrounding the comet’s solid nucleus.

The coma’s green glow comes from diatomic carbon (C2), a simple yet unstable form of elementary carbon. Scientists have suggested that as dicarbon streams out of the comet core, it is destroyed by sunlight – this is why the comet tail, unlike the coma, is colourless. However, the precise mechanism of this supposed photodissociation had remained unclear.

Researchers in Australia and the US have now for the first time observed diatomic carbon’s photodissociation in the lab. The team produced dicarbon by photolysing tetrachloroethylene, and then breaking it apart with laser pulses. This allowed them to determine its bond dissociation energy with the same precision as for oxygen and nitrogen. Previous measurements for dicarbon had uncertainties an order of magnitude higher than for other diatomic molecules.

To break its quadruple bond, the molecule must absorb two photons and undergo two ‘forbidden’ transitions, those that break spectroscopic rules. Cometary dicarbon, the researchers calculated, has a lifetime of around two days until sunlight breaks it apart – the reason why its colour is visible in the coma but not in the tail.