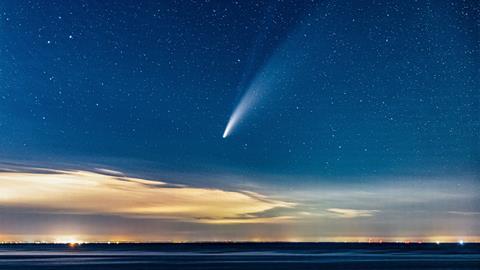 Polish astronomers have identified nickel vapour in the tail of the comet 2I/Borisov – an interstellar comet spotted passing through the solar system in 2019 – even though the temperature was far too low for the sublimation of nickel.1 The researchers suspect, therefore, that the nickel was released from photodissociation of compounds in the comet. Independent observations by Belgian astronomers identify similar gaseous nickel, in cold solar system comets, suggesting a possible organometallic origin.2 The two papers together, therefore, could suggest a shared organic chemistry between different planetary systems.

When Piotr Guzik and Michał Drahus of Jagiellonian University in Kraków analysed ultraviolet spectra from the tail of 2I/Borisov, they did not expect emission lines from metals as these remain solid up to high temperatures. ‘It was far away from the sun and the coma was cold,’ explains Guzik. ‘But there were some strange unidentified lines there … like spikes, more or less.’ The researchers scoured the records for clues from previous comets but drew a blank until Guzik encountered the spectrum of the Ikeya–Seki comet of 1965, which passed so close to the sun it was visible in the daytime sky. ‘I noticed there are some lines that are very close to ours,’ says Guzik. ‘I found our brightest line is at almost the same wavelength at which there is nickel in Ikeya–Seki.’ The other lines also turned out to be present. Mathematical modelling convinced the researchers that neutral nickel atoms were indeed being vapourised at 200K.

How comets could release metal atoms. The surfaces of the comets observed in this research do not reach high enough temperatures to release such atoms directly. Instead, the source of the atoms might be organometallic compounds that are emitted from the comet’s surface and then break up in the comet’s atmosphere when irradiated by sunlight. These compounds could be metal carbonyl complexes, which consist of carbon monoxide molecules bound to a metal atom, or metal-bonded polycyclic aromatic hydrocarbons, which are sheets of carbon atoms bordered by hydrogen atoms and attached to a metal ion. Carbon, grey; oxygen, red; hydrogen, white; metal, blue

The researchers postulate that a short-lived molecule – stable in deep space – may photodissociate when exposed to light even at relatively cold temperatures. They do not propose a specific molecule, but researchers from the University of Liège in Belgium observed similar nickel vapour – as well as iron vapour – in luminescence from a number of comets in our own solar system. They suggested a number of possible organic compounds, such as carbonyls and polycyclic aromatic hydrocarbons, could have produced it by photodissociation. If these were also responsible for the emissions from 2I/Borisov, it raises the intriguing possibility of organic chemistry in other planetary systems being similar to our own. ‘At least conditions at the moment when comets were formed should probably be similar to form at least the same molecules containing nickel,’ says Guzik.

Physicist Steven Bromley and planetary scientist Dennis Bodewits are impressed by the researchers’ detection of nickel.3 ‘A comet releases about [100kg] of water per second and about the same nickel content as a nickel coin,’ says Bromley. Bodewits believes it will only be possible to realise the work’s true potential when a comet sample return mission reveals precisely which compounds are causing the luminescence. ‘We’re seeing stuff in the gas phase, but we want information about that icy object,’ he says. ‘That’s partially a laboratory astrophysics question, which is where our interest lies: what reactions are possible, how can we simulate them, and how can we then try and figure out what it means?’