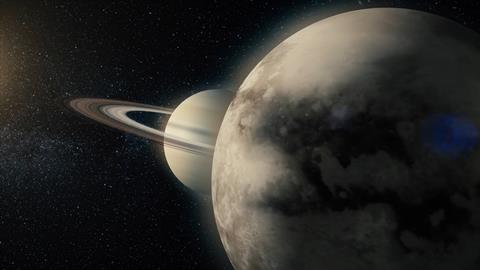 Computer says no to membrane-bound life on Titan

A new study has found that azotosomes, a form of cell membrane that could bolster otherworldly life, are unlikely to be able to form on Titan.1 The findings follow up on a 2015 study that first proposed the membranes and described their kinetic stability.2

Titan is a dynamic place – the mammoth moon of Saturn boasts seasonal weather patterns, a thick nitrogen-based atmosphere and liquid seas of methane. But even with these features, the environment is very different to that of Earth’s, with surface temperatures averaging −179°C (94K). All of this makes for an interesting place to look for life and probe the limits of chemical complexity. 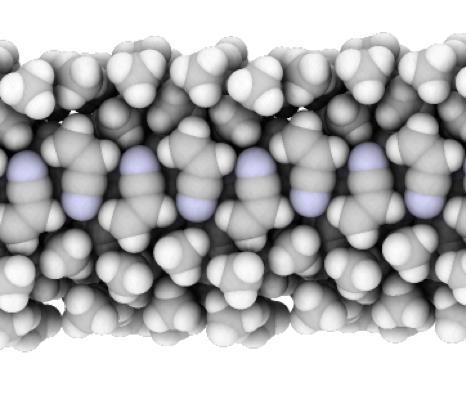 The azotosome membrane, a candidate structure previously proposed to allow for cell membranes on Saturn’s moon Titan. Calculations show that its self-assembly is unlikely

A lack of water on Titan’s surface means a lipid bilayer membrane, like those found in life on Earth, isn’t possible. This led Paulette Clancey of Cornell University, US, and her colleagues to postulate azotosomes: cell membranes composed mainly of acrylonitrile groups (present on Titan) that point their non-polar groups toward the outside of the cell. However, a new computational study, from Martin Rahm and Hilda Sandström at Chalmers University of Technology in Sweden, now suggests that the astrobiological community might be out of luck when it comes to finding these on Titan.

Using quantum mechanical calculations, Rahm and Sandström determined the energy of the crystalline form of acrylonitrile, as well as that of an azotosome membrane, finding that the energy of the membrane lay significantly higher. This means that the membranes are unlikely to assemble spontaneously. ‘On Earth, self-assembly occurs because the membranes are in the lowest energy state that the lipid building blocks can arrange themselves into,’ explains Rahm. ‘The energy difference [here] is much higher than what you see in stable materials. And because these energies are cumulative – meaning every single molecule added to the membrane would raise its energy by a set amount relative to the lower energy structure – self-assembly becomes a very unlikely process.’

Rahm and Sandström also say that while life on Titan is unlikely, this is no reason to rule it out completely. They speculate that the frigid conditions could compartmentalise cellular machinery in the solid state, rendering a membrane unnecessary. ‘One thing is for sure – that there’s many more unanswered questions and possibilities left to explore on Titan,’ adds Rahm.

‘Their conclusions are well computationally supported,’ says Valentina Erastova, a computational chemist at the University of Edinburgh, UK. ‘I wish there could be more computational studies of this quality.’

‘Often reality outpaces our computer simulations,’ says Ralph Lorenz, a planetary scientist at Johns Hopkins University in the US. ‘Maybe Titan will surprise us again.’