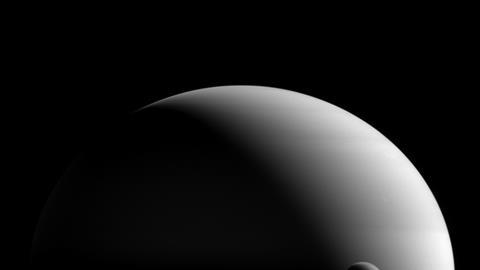 A candidate biopolymer for prebiotic chemistry and potential life could be found on Saturn’s largest moon Titan, US researchers claim. Their computational paper also offers a solution to the riddle of abundant hydrogen cyanide (HCN) in the moon’s atmosphere but its absence from its surface.1

The Cornell University team argues that HCN-based polymers may form on the surface of Titan, and highlight polyimine as a potential candidate as it has previously been identified as a product of HCN polymerisation in the lab.2 HCN is considered an important precursor to amino acids and nucleic acids.

‘Titan is the only other body in the solar system, aside from Earth, that has flowing liquids on its surface. Moreover, hydrogen cyanide, a key prebiotic molecule, exists there in ample amounts, as it likely did on the early Earth,’ notes author Martin Rahm, a quantum chemist at Cornell University.

Titan has a nitrogen atmosphere, is carbon rich and oxygen poor. It also is extremely cold, free from liquid water and washed by alkane seas. Titan is a natural lab for exploring non-terrestrial prebiotic chemistry. However, it is so cold that most chemistry is difficult to imagine. 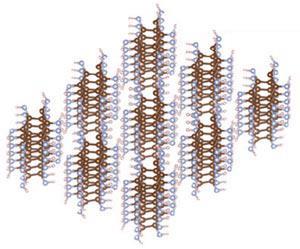 The Casini probe indicated that HCN is missing from Titan’s surface and polyimine might help explain this absence. ‘We have shown that a likely reaction product of HCN, polyimine, is capable of absorbing light of many wavelengths,’ Rahm explains. ‘If present on Titan, it may therefore allow for photochemically driven chemistry, some of which, in principle, might be prebiotic in nature.’ The sun should supply enough energy for the polymer to cleave itself, polymerise further or act as a catalyst.

The researchers combined density functional theory with a structure search algorithm to predict different 1D chain conformations and 3D crystals of polyimine. This chain of carbon, hydrogen and nitrogen atoms is flexible, which helps mobility in low temperatures; it has several polymorphs and variable electronic properties.

‘Titan is a wonderfully different world in how it’s significantly colder and covered in seas of hydrocarbons instead of water,’ comments Paul Bracher, an organic chemist at Saint Louis University, Missouri, US. ‘Interactions that would be too weak to generate complex structures on warm and wet Earth might be just the right interactions for cold and oily Titan.’

‘This [paper] shows how the structures and functions that life needs can be created with molecules present on Titan and could work in liquid methane and ethane solutions,’ adds Chris McKay, planetary scientist at Nasa Ames Research Center. ‘Amino acids, DNA and water may not be the only biochemistry for life. Clearly experimental work to follow up on these theoretical calculations is needed and then, of course, missions to Titan to see what is there.’