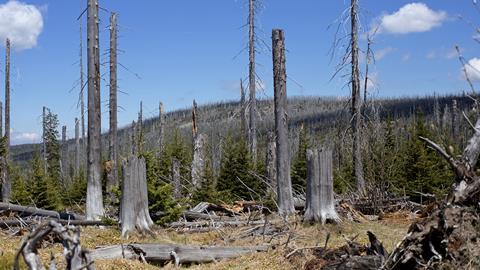 China’s plans to cut ammonia emissions to reduce haze pollution may worsen the country’s acid rain problem, a new study has found. To evaluate the potential impact of the government’s plans to reduce ammonia in the atmosphere, a team of researchers in China used models to predict how these cuts would affect haze pollution and acid rain.

Over the last few decades, as a result of growing industrialisation, China has seen increased air pollution and acid rain, both of which are harmful to human health and the environment. To combat haze pollution, the government has put forward proposals to reduce sulfur dioxide and nitrogen oxides by 15% by 2020, and are funding significant research into agricultural ammonia emission control. However, the comprehensive effect such a change would have on the overall ecosystem is not fully understood.

To better evaluate the possible ramifications, the Chinese team used a chemical transport model alongside nationwide air measurements and a sophisticated ammonia emission model to predict the effects of lower ammonia pollution. They found that haze pollution would be reduced by between 11–17% if there was a 50% reduction in ammonia with improved agricultural management and a 15% reduction in sulfur dioxide and nitrogen oxides. However, the model also revealed that the reduced levels of ammonia could reduce the pH of rain by up to one unit.

The team concluded that while it was possible to reduce ammonia emissions significantly, any economic benefit of the plans would be partially offset by the increased frequency of more acidic rain. Instead, the researchers suggested that a better approach would be a region-specific strategy that examines multipollutant controls to prioritise the needs of different areas in the country.