A breakthrough in cyclotron technology is set to end shortages of a vital medical imaging isotope. The new technology will result in the decentralisation of the production of technetium-99m, with hospitals making the isotope on demand using tabletop cyclotrons.

99mTc is widely used around the world to image organs and bones using techniques like single-photon emission computed tomography. Imaging using 99mTc relies on its ability to produce gamma rays as it decays into ruthenium-99. However, 99mTc - the m denotes that it is a metastable nuclear isomer created by the excitation of a proton or a neutron - has a half life of only six hours. This means that hospitals that want to use the isotope have to ’milk’ it from a generator, colloquially known as a moly cow. The cow contains a supply of molybdenum-99, as molybdenate (MoO42-), which has a half life of 66 hours, and decays to 99mTc. The technetium is separated out using column chromatography.

Unfortunately, problems have dogged the production of 99Mo. About three-quarters of the world’s supply is made in just two nuclear research reactors - the Chalk River plant in Canada and the High Flux Reactor at Petten in the Netherlands. Unscheduled shutdowns have caused shortages of the isotope in the past and both plants are now ageing and expected to close in the next five years. 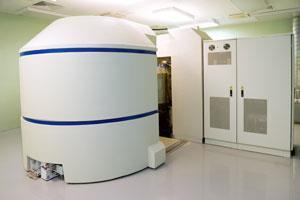 Cyclotrons are already making their way into hospitals

Scientists from TRIUMF, Canada’s national laboratory for particle and nuclear physics, say that they have solved this problem. They have now shown that it is possible to make 99mTc in a cyclotron at the lab. They made the isotope in the cyclotron by blasting 100Mo with protons.

In the past, says Paul Schaffer, head of TRIUMF’s nuclear medicine division, medical isotopes, including 99Mo, were made in gaseous or liquid form. Part of the solution to making 99mTc in a cyclotron was to devise a way to extract the solid disc of metal, without exposing anyone to it. To do this they created a robotic arm that could extract the metal.

Schaffer, who is the team’s chemist, says chemistry played a central role in the advance. ’When moly-99 decays by beta decay it liberates 99mTc momentarily and when it settles down chemically it grabs oxygen from its environment forming pertechnetate (99mTcO4-),’ he says. However, while hospitals are set up to produce imaging agents from 99mTcO4-, there is no oxygen in the cyclotron. ’The answer was to add hydrogen peroxide and this gives 99mTc the oxygen it’s looking for and oxidises it up to pertechnetate,’ Schaffer adds. He was also kept busy developing methods to turn the 100Mo powder into wafers and finding resins which could separate the two isotopes.

Fran?ois B?rnard, from the British Columbia Cancer Agency in Vancouver, says that theoretical calculations showed that it was possible to produce 99mTc in a cyclotron as far back as 1971. However, producing such short lived isotopes in a cyclotron would have been of little use in a medical setting as it wouldn’t have been possible to transport them to a hospital fast enough. Now, thanks to miniaturisation, potentially every hospital could have a tabletop cyclotron in the near future.  This could transform diagnostic medicine, B?rnard says, as not only will every hospital be able to make as much 99mTc as they need, they will also have access to isotopes with even shorter half lives, such as zirconium-89m, which could open up new avenues for imaging.

The TRIUMF team is now working with Health Canada, the nation’s medicines regulatory agency, to begin tests to ensure that the 99mTc is safe and contains no pyrogenic or radioactive contaminants. According to Shaffer it should now only be a few months before the team gets the go ahead to start clinical trials.

Two companies are currently working to produce these tabletop cyclotrons - GE Healthcare and ABT Molecular Imaging - with larger room sized cyclotrons already available. ’Physics paved the way with these elaborate high energy machines,’ Schaffer says, ’but we’ve come to recognise that we don’t want to smash these things to pieces, we want to just convert one element into another. The energies needed for that aren’t nearly so high.’