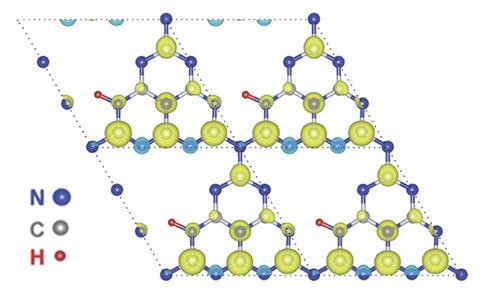 Spintronics exploits the intrinsic spin of electrons and their associated magnetic moments and charges to make solid-state devices such as storage media and sensors. Generally, the materials used to make these devices are ferromagnetic, that is, they form permanent magnets. Ultrathin 2D nanosheets can be used to construct such devices because they exhibit spin ordering within their structures.

However, metal-containing ferromagnetic nanosheets generally cannot give large spin relaxation times. Metal-free nanosheets, with only s- and p- electrons, usually show weak spin–orbit coupling and large relaxation times, making them more suitable for use in spintronics. The main issue with current metal-free structures however, is that they lack ordered spin structures, which hampers their ferromagnetic behaviours.

Changzheng Wu, from the Hefei National Laboratory for Physical Sciences at the Microscale, and his coworkers have found that by hydrogenating g-C3N4­, a graphite-like material with weakly-stacked C—N layers, the material forms hydrogen dangling bonds, inducing spin ordering to the structure.

A dangling bond occurs when an immobilised atom has an unsatisfied valence. In g-C3N4, the carbon and nitrogen atoms are sp2 hybridised and the N atoms have lone pairs of electrons on them, which are immobilised within the structure. The hydrogenation of g-C3N4 is therefore much more energetically accessible than that of graphene, because interactions can occur between the H+ ions and the highly electronegative nitrogen atoms. These interactions are termed ‘hydrogen dangling bonds,’ and have an influence on the spin behaviour of the structure. And essentially, according to Wu, endow ferromagnetism on the material without changing its crystal structure.

A materials scientist, Guihua Yu, at the University of Texas at Austin, US, says that this research ‘presents a new perspective of triggering intrinsic ferromagnetism in 2D metal-free nanomaterials,’ and will widen the scope of 2D ferromagnetic materials. Wu and his colleagues plan to extend this work by introducing dangling bonds and defects into other ultrathin 2D nanosheets to regulate their spin behaviours.