Fenceline monitoring data reveals that several US oil refineries are emitting benzene above levels that require corrective action, and could potentially be harmful to the health of local communities, according to the Washington, DC-based non-profit Environmental Integrity Project (EIP). 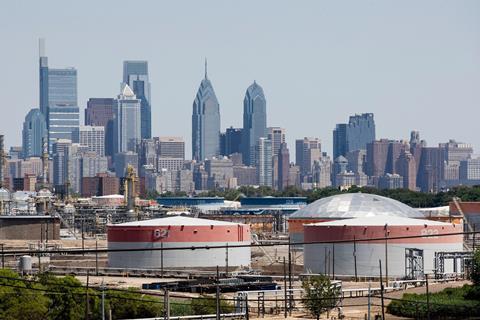 Many of the refineries with the highest measured benzene levels have significant residential communities or workplaces nearby.

In 2021, 118 of the 129 operational refineries in the US reported two-week average benzene concentrations from monitors at their site boundaries to the Environmental Protection Agency (EPA). Of those, 12 facilities had annual average concentrations above the EPA’s federal action level of 9µg/m3. Exceeding this threshold requires refinery owners to perform a root-cause analysis and then submit a corrective action plan to the agency to reduce its benzene releases.

EIP spokeswoman Kira Burkhart says her organisation wants the EPA to take stronger enforcement actions. ‘Many of these refineries repeatedly exceed the action level year after year, so they’re clearly not doing enough to fix the problems and it’s time EPA stepped in,’ she tells Chemistry World. For example, by EIP’s analysis, the annual net benzene concentration at Marathon’s Galveston Bay refinery in Texas City has been above the action level since 2018, and steadily increasing to nearly 40µg/m3 in 2021.

At a 12 May press conference to release its analysis, EIP executive director Eric Schaeffer urged the EPA to make companies pay penalties when their benzene levels persist above the action level.

To estimate the potential public health implications of benzene levels around refineries, EIP also compared the data against different exposure and risk standards. To evaluate short-term risk, EIP looked at the US Agency for Toxic Substances Disease Registry’s (ATSDR) acute inhalation minimal risk level. This suggests that concentrations below 29µg/m3 over 1-14 days pose minimal risk of non-cancer health effects. By EIP’s analysis, fenceline monitors at 22 refineries measured a two-week average concentration of benzene greater than this threshold at least once during 2021, with the highest being 300µg/m3.

To estimate potential long-term effects of low-level exposure, EIP took the average of the highest recorded benzene concentration in each two-week period across the year. These values were compared against the state of California’s reference exposure level of 3µg/m3 for recurring exposures (below which there would be no expected increase in non-cancer health risks). This is the most stringent limit of any state in the US, and levels at 56 refineries exceeded this threshold in 2021.

Hotspots in Texas and Louisiana

There are some noticeable local differences within the data. Of the 12 refineries that exceeded the EPA’s action level in 2021, five were in Texas and four were in Louisiana. In contrast, all 12 facilities within the state of California reported levels below the stricter state reference level of 3µg/m3.

The EPA action level of 9µg/m3 is part of a federal rule, so states cannot establish weaker standards. But states can, and do, have different regulations when it comes to legally allowable benzene concentrations. They also have varying approaches to permitting and enforcement. This is one reason for the disparity in concentrations detected in different states, according to EIP.

Refiners have invested billions of dollars to control emissions and pollution, and from 1980–2020 refinery emissions were down more than 70%

Other factors at play include the age and location of these facilities. Refineries along the Gulf coast, for example, are more likely to experience hurricanes, which can cause damage and force unplanned startup and shutdown events, the organisation explains. This can lead to excess emissions of benzene and other air pollutants, as well as wastewater.

Scott Lauermann, a spokesman for the American Petroleum Institute based in Washington, DC, notes that EPA’s fenceline monitoring programme is not intended to measure community benzene levels. Because fenceline monitors capture benzene emissions from all nearby sources, he says, the data may at times reflect emissions from external sources and events like wildfires and neighbouring facilities.

EIP recognises that limitation, but used fenceline data in its analysis because that’s the most robust data available. ‘We need to see more monitors in neighbourhoods next to these refineries so we can better inform and protect the public,’ Burkhart suggests.

The American Fuel & Petrochemical Manufacturers (AFPM) trade body, also headquartered in Washington, DC, claims that EIP has ‘misrepresented this tool by selectively pulling out a variety of numbers with inadequate and misleading information, creating confusion and misinterpretation among the public’. And while the EPA’s 9µg/m3 action threshold happens to correspond to ATSDR’s chronic inhalation minimal risk level for exposure over more than a year, AFPM states that it was never supposed to be a health standard.

‘Refiners have invested billions of dollars to control emissions and pollution, and from 1980–2020 refinery emissions were down more than 70%,’ AFPM states.

For its part, the EPA says it is ‘actively engaged’ in reviewing the benzene fenceline data and has initiated several investigations of facilities to determine the reasons for elevated benzene emissions. The agency states that it will ‘continue enforcement efforts to ensure exceedances are corrected expeditiously.’