Deadly fire and explosions at container depot in Bangladesh

A deadly blaze and several massive explosions have left 48 people dead and nearly 450 injured in Sitakund, near the port city of Chittagong, Bangladesh. The fire began on the evening of 4 June, and took 86 hours to douse with the army’s assistance. The explosions killed ten fire service personnel, with a further three among those still missing. DNA tests have been carried out to identify most of the bodies. 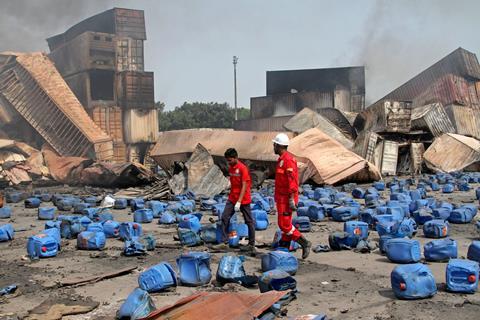 The incident took place at BM Container Depot, a private facility storing clothing and other items for export. The exact cause is being investigated, but hydrogen peroxide appears to have played a significant role. The chemical was being stored in containers – allegedly without authorisation – destined for use in the textile industry. As the fire spread, eyewitnesses said that multiple containers exploded and were launched into the air. Clouds of toxic fumes formed, causing burns, eye injuries and deaths.

‘The massive explosions have traumatised the population the scale of which was hardly ever seen in Bangladesh,’ says Muhammad Ali Shahin, an environmental activist with the non-profit Young Power in Social Action based in Chittagong. ‘Nearly 200 people got critically injured and deaths are still rising, especially among badly burned people.’

Civil society organisations have called the fire a ‘structural murder’ and blamed the incident on Bangladesh’s apalling industrial safety record, poor infrastructure and institutional preparedness at odds with international safety standards. Activists say that no lessons have been learned from numerous previous accidents in Bangladesh. They expressed anger that eight BM employees were arrested by the police for negligence rather than the facility’s owners.

The Smart Group, which owns the depot, has promised to pay BDT1 million (£8860) in compensation for every death and BDT600,000 for those seriously injured or maimed. The Bangladeshi government will also contribute compensation of BDT200,000 to the families of those killed and BDT50,000 for those injured.

The same day (4 June) 12 workers died and 20 were injured in a separate incident. A boiler exploded at a chemical manufacturing facility run by Ruhi Industries in Hapur, 70km outside Delhi, India.