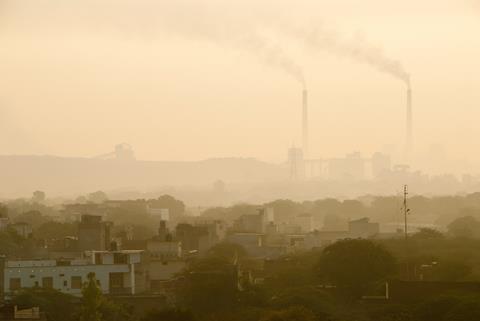 Delhi’s air quality is so bad that it is considered an improvement when it changes from ‘severe’ to ‘very poor’, quips Sunita Narain, director of the Centre for Science and Environment (CSE), a Delhi-based non-government organisation. In winter, Delhi’s air pollution fluctuates between poor and severe every other week and takes a turn for the worse when wind speeds fall and a dense fog settles over northern India. Amid rising concerns over health effects and limited success tackling smog, atmospheric scientists are attempting to track polluting particles to help combat Delhi’s pollution.

The source of Delhi’s pollutants is a mix of emissions from vehicles, coal-fired plants and industries such as cement and steel. Added into this mix are agricultural emissions from burning crop stubble, as well as rubbish. These emissions are aggravated by natural forces such as dust blowing into India from deserts to the west. The November smog in Delhi last year, for example, was worsened by a dust storm in west Asia, according to a study by the Indian Institute of Tropical Meteorology, Pune.

The first comprehensive assessment of the current and predicted toll that air pollution takes on the health of Indians has just found that, in 2015, particulate matter from transport and burning of biomass and coal was responsible for about 1.1 million deaths, or 10.6% of the total number of deaths in India. The study also warns that if no action is taken exposure to particulate pollution is likely to increase by more than 40% by 2050.

At the end of last year a high-level task force created a draft action plan to curb air pollution in Delhi. It targets microscopic airborne, inhalable particles called particulate matter (PM) for monitoring. These are generally classified as PM10 or PM2.5 depending on whether they have diameters of 10μm or 2.5μm, respectively. PM2.5 can settle deep in the lungs causing severe breathing problems, heart and lung disease, hypertension and lung cancer.

The results of this study chime with The Lancet’s 2017 special issue on pollution and health in south-east Asia. Pakistan, Bangladesh and India had the highest number of deaths caused by air pollution, with more than 130 deaths per 100,000 people. By comparison, China, well known for its smog-choked cities, recorded 84 deaths per 100,000.

But Delhi is not an isolated pocket of pollution. ‘Air pollution is a pan-India problem,’ says Chandra Venkataraman at the Indian Institute of Technology (IIT), Bombay. She notes that it is particularly pervasive throughout the Indo-Gangetic Plain.

Venkataraman’s team, who contributed to the 2018 assessment report, modelled annual average ambient concentrations of PM2.5 over India and found they varied from 25–150mg/m3. They also modelled population-weighted annual average exposure to PM2.5 and found wide differences, varying from 30–145mg/m3. However, all exceed World Health Organization (WHO) and US standards, and most exceed the Indian annual PM2.5 standard of 40mg/m3. Regional differences were noticeable with domestic biomass fuels responsible for much of north India’s air pollution problems. In the east coal is to blame, while in the north-west it is the burning of crop residues. 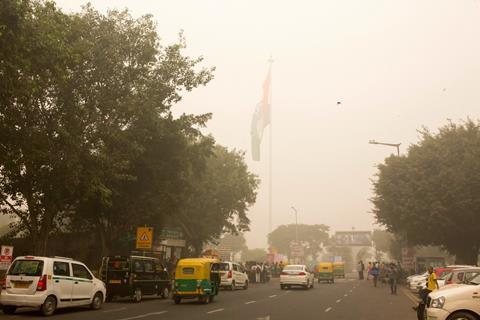 Vehicle ownership in Delhi is expected to continue to rise, compounding the city’s pollution problems

Cady-Pereira’s team found that emissions of ammonia in Delhi and Beijing are similar, but the levels of sulfur dioxide and nitrogen oxides are much higher in Beijing. ‘Ammonia reacts with acids derived from the other two to form PM2.5. However, if there is not sufficient acid for the ammonia to react with, it just remains in atmosphere.’ But as levels of sulfur dioxide and nitrogen oxides are expected to increase in India due to rising numbers of vehicles and power plants, PM2.5 levels will grow too.

This work has shown an overall increase in PM2.5, interspersed with two phases – 2002–2005 and 2009–2011 – when they fell. Dey says the first dip in PM2.5 levels was probably due to the Delhi government’s mandate that public transport use compressed natural gas in place of petrol and diesel, but scientist are unsure about the drop from 2009–2011.

Dey’s team has also used satellite data to study how aerosols – such as haze, smoke, dust and other particles – absorb and block light. These aerosol optical depth studies help scientists assess air quality where ground-based measurements are scant, and where remote-sensing can complement the latter to provide regional coverage.

‘Any effort [to curb pollution] in Delhi alone seems to fail because Indian policymakers also need to set timelines for achieving air quality standards,’ Dey adds. ‘We are nowhere close to it now. For example, Delhi’s annual PM2.5 is three times the Indian standard.’

Compounding the problem is a paucity of reliable country-wide data. ‘Official real-time monitoring is inadequate and most cities make do with an archaic, manual monitoring system,’ says Narain. CSE studies reveal that air quality is monitored in only 303 cities out of more than 6000. There has also been a drastic fall in the number of cities complying with air quality standards – from 13% of Indian cities in 2007 to 2% in 2016 – according to the CSE.

What most people do not realise is that the ‘chronic impact due to long-term exposure to such high background levels of pollution has a larger burden than short-term spikes’, cautions Dey. ‘Air quality management plans need to tackle both the spikes and reducing background levels.’

Meanwhile, non-government organisations such as CSE and Delhi-based Urban Emissions recommend a slew of measures, such as promoting walking, cycling, public transport and cleaner fuels. Other recommendations include strict controls on diesel generators and burning refuse, and tighter emission standards for heavy industry. Urban Emission’s Sarath Guttikonda says that if these relatively simple initiatives can be rolled out then, it should be possible to begin to tackle India’s air pollution problems.