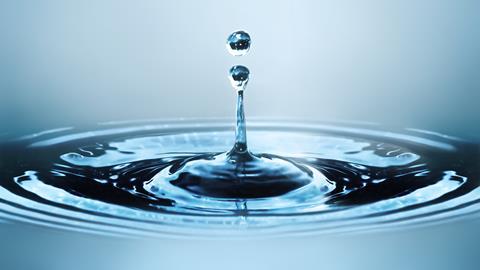 By trapping water inside synthetic lipid membranes, scientists in Switzerland have been able to prevent it turning into ice, even at temperatures as low as -263°C. The researchers say their results could help further understanding of how water and lipids interact with each other under these conditions, and shed new light on how some living organisms are able to survive the extreme cold.

A team led by Ehud Landau of the University of Zurich and Raffaele Mezzenga of the Swiss Federal Institute of Technology wanted to study how lipids – such as the lipid membranes found in cellular environments – can change the behaviour of water molecules at temperatures that are below its usual freezing point.

The researchers synthesised new lipids that contain cyclopropyl groups – instead of double bonds – in the hydrophobic tails of monoacylglycerol molecules. The three-membered rings give the lipids rigidity, allowing them to form highly curved bilayers that can incorporate water into tiny channels. ‘This molecular design was inspired by lipids found in some bacterial cells, which are known to survive sub-zero temperatures,’ says Livia Salvati Manni, one of the researchers involved in the study. ‘In contrast to other lipids, these compounds don’t crystallise at low temperature, which is key in preventing the crystallisation of water inside the channels.’

Salvatore Assenza, another member of the team, adds that the lipid bilayers can arrange into different structures in the presence of water, including cubic and lamellar phases. ‘Usually all these phases are filled with liquid water and at low temperature, both the lipid and the water freeze, destroying the structure. The key feature of our lipids is that at low hydration, they form structures capable of maintaining the disordered (liquid or glassy) nature of water at virtually any temperature.’

The researchers used liquid helium and liquid nitrogen to cool the samples at different rates between 0.1 and 5°C per minute. Using x-ray and neutron diffraction, NMR and calorimetry techniques, combined with molecular dynamics simulations, they demonstrated the presence of liquid water down to –10°C in the cubic phase and glassy water down to –263°C in the lamellar phase.

Nancy Levinger of Colorado State University, US, says it’s quite interesting that the self-assembled structures can resist phase changes with temperature, and that the water remains liquid even when samples are cooled slowly. ‘But the actual water staying amorphous is less surprising to me,’ she says. ‘The samples have very low hydration levels, so almost all the water is in contact with the polar part of the new lipid headgroups, and those headgroups are essentially the same as ethylene glycol, which we all know is antifreeze.’

John Seddon at Imperial College London, UK, says that the fact that the lipids can act as biocompatible systems for trapping amorphous water is an important feature that could be used to avoid freeze damage to sensitive samples. ‘The mechanism by which the cubic phase prevents crystallisation of the water appears to be due to the fact that the radius of the water channels is less than the minimal radius of approximately one nanometre for an ice crystal to form from a water droplet,’ he says. Assenza points out that the disordered configuration of the lipids also plays an important role. ‘Large water channels result in ice formation, but employing chemically similar lipids that don’t keep a disordered configuration at low temperature also leads to water crystallisation,’ he says.

The researchers believe that their designer lipids could serve as a new tool for studying molecular structures at low temperature without ice crystals that would otherwise hinder such studies.