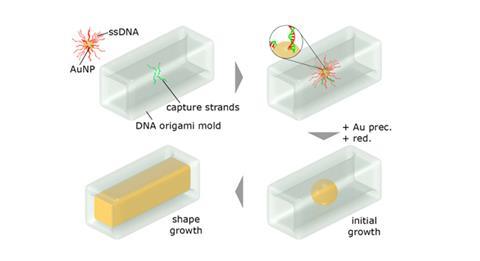 German researchers have developed a DNA origami approach to produce custom-made inorganic nanoparticles with programmable, pre-designed shapes. The work could be useful for developing nanoelectronics circuitry and components, as well as improve sensors and catalysis which strongly depend on particle shape.

The past five years have seen an explosion in the exploitation of DNA nanotechnology to produce self-assembling DNA structures of practically any desired shape. But a similar system was lacking for making nanoparticles from inorganic materials, such as metals, which could only be produced with certain fixed geometries, such as spheres or rods, using elaborate and specialised protocols.

Now, Ralf Seidel and colleagues at the University of Mu¨nster, Germany, have seized upon recent DNA advances and created a self-assembly system that uses DNA to make designer moulds which are then used to cast nanoscopic objects from gold. ‘Using moulds to produce tools from metal is truly an ancient technique,’ says Seidel. ‘Here we almost do the same, just on the nanoscale, that is 100 million times smaller. The big surprise was that it worked as planned.’

The team produced a DNA mould using DNA origami, where the right sequences and temperatures led to the DNA folding into the desired mould that was programmed by computer. The mould cavity, in this case a 40nm cuboid-shaped tube, was then seeded with gold nanoparticles, which grew and filled the mould after a gold salt and reducing agent were added.

‘Electron microscopy revealed that we indeed got particles of 40 nm in length and the designed shape,’ says Seidel. What’s more, they found that multiple moulds can be put together, much like Lego bricks, to build up more complex inorganic structures.

Shape control during growth of metal nanoparticles by confinement within a DNA origami container is novel and could be useful for fabrication of functional devices with designed optical and electrical properties, says Thomas LaBean, who investigates DNA nanotechnology at North Carolina State University, US. ‘It will be nice to see how tightly their method can control particle morphology when starting with more complicated cavity geometries.’

Seidel suggests that it will be possible to not only produce gold particles with complex shapes, but also particles from other materials, including magnetic materials or semiconductors. ‘By combining these different materials it should be possible to self-assemble in a “cooking pot” electronic components and maybe even small electronic circuits,’ he says. It could also help improve sensing and catalytic systems that strongly depend on particle shape.