Researchers in China have developed an ultrasensitive test that changes colour when it detects a gene associated with an increased risk of developing breast and ovarian cancer.

Clinical diagnosis of inherited breast cancers linked with the BRCA1 gene has attracted noteworthy research but methods, which include Raman spectroscopy, remain both expensive and time consuming. And Myriad Genetics’ recent loss of patent protection covering tests for BRCA1 and BRCA2 genes has created further space within the field.

On testing positive for the faulty BRCA1 gene in 2013, actress Angelina Jolie had a preventative double mastectomy. This year she had her ovaries and fallopian tubes removed. Fellow women, and men, have been inspired to get themselves checked.

Colorimetric analysis is a well-established technique that measures analyte concentration through colour intensity. Now, Wei You and his team at the People’s Hospital of Zhengzhou University have extended colorimetric analysis to detect the BRCA1 gene.

‘As a breast surgeon, I think that we should not only focus on treatment but also the prevention and pathologic mechanism of breast cancer,’ says You. ‘Patients could not have a BRCA1 examination in our hospital – they had to send samples to a company. In addition, most people could not afford this expense. So I decided to find a better way.’

Their system achieves impressive sensitivity, down to 3.3fM, through a multi-step cascade reaction that is initiated when target DNA from the BRCA1 gene binds with a DNA probe. Rolling circle amplification generates multiple copies of circular DNA further along the cascade to intensify the ultimate blue signal. 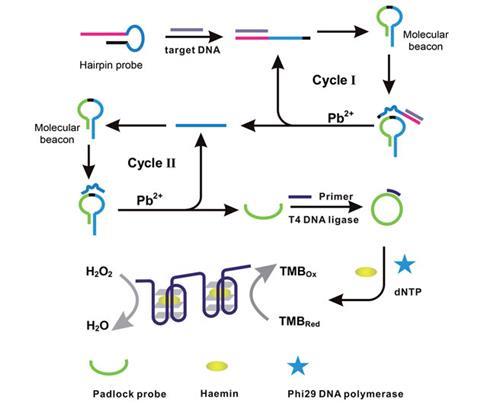 You explains their strategy exhibits promising selectivity towards the BRCA1 target. ‘The colorimetric biosensor is very simple and with further optimisation, the method will be suitable for use in any laboratory and hospital.’

Itamar Willner, a biosensors expert at the Hebrew University of Jerusalem, says the research ‘presents a clever system and interesting approach to sensing.’ Having applied their system to synthetic genes, Willner emphasises that both extending its application to real tissue samples and comparison with other amplified DNA sensors are crucial considerations to address in future research.