Dried lake bed on Mars ‘could have supported life’ 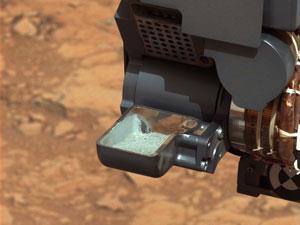 The Mars rover Curiosity has discovered conditions on the planet’s surface that could conceivably have once supported life. Chemical and spectroscopic analysis of a sample of rock suggest that conditions would have been sufficiently benign for ancient microbial life forms to have survived, and that a source of chemical energy could have been at hand.

In the latest leg of its mission, Curiosity drilled into a rock in an area called Yellowknife Bay, which seems likely to be the end of an ancient river system or the bed of an intermittently wet lake, and analysed the crushed core sample with a range of techniques including powder x-ray diffraction and gas chromatography.

The analysis revealed that the rock is made from fine grain mudstone containing a number of igneous minerals, such as olivine, a magnesium iron silicate. Crucially, around 20% of the sample consists of clay minerals. This is significant because the type of clay detected is the product of the reaction of igneous minerals with relatively neutral and unsalty water. The presence of calcium sulfate in the sample suggests that the surrounding soil was neutral or mildly alkaline.

The chemical analysis of the sample also revealed compounds in varying states of oxidation – for example both sulfate and sulfide. This is significant because it demonstrates that the environment was not violently oxidising. All these factors point to a habitat in which ancient microbes could conceivably have survived. Interestingly, the lack of oxidation within the core sample was hinted at by its colour – grey rather than the characteristic red of most of the highly oxidised surface of Mars.

Joe Michalski, a planetary geologist at the Natural History Museum in London is excited by the findings. ‘We interpret the analysis as a sedimentary assemblage of materials,’ Michalski tells Chemistry World. ‘The presence of clay minerals indicates the presence of sustained water, and the fact that these are smectite clays indicates that the pH of the fluid was not as extraordinarily acidic as we see elsewhere – high acidity is not good for microbial life.’ Clays are also good at preserving organic material, should there be any.

‘The SAM analysis shows different kinds of sulfur minerals, some of which are oxidised and some of which are reduced, so we have sulfur in different states of oxidation. We also know there is carbon in some form,’ Michalski says. ‘The presence of different oxidation states is significant for the possible presence of life, because organisms like to see chemical gradients – something very reducing next to something very oxidising, which allows them to extract energy. If you were to design a habitat where you want microbes to live happy and fulfilled lives, you might design a habitat like this.’

While these are not the first findings of the historical presence of water on the surface of Mars, nor of the presence of clay minerals or the other compounds in the sample, their presence in one location is, says Michalski, ‘really incredible’ and is a major achievement relatively early on in Curiosity’s mission.