Carbon dioxide and methane could be converted into cleaner fuels and feedstocks using a stable new catalyst that resists deterioration, even after hundreds of hours of use at high temperatures. The material’s clever design might even help solve stability issues in other catalytic processes.1

Reacting methane with carbon dioxide to make hydrogen and carbon monoxide – a process known as dry reforming – offers a way to convert unwanted greenhouse gases into clean fuel and other useful chemicals. Hydrogen can be used as an environmentally-friendly energy source, while syngas – a mixture of hydrogen and carbon monoxide – can be transformed into a wide range of useful materials through the Fischer–Tropsch process.

But dry reforming typically requires very high temperatures (800–1000°C) and under these conditions, catalysts have been dogged by two critical problems: coking and sintering. Coking happens when carbon deposits accumulate on the catalyst surface, while sintering is when catalyst particles bind together to form aggregates. Both cases lead to the catalyst losing its activity.

Now, a new catalyst has been shown to operate continuously for more than 850 hours without deteriorating. It is formed of molybdenum-doped nickel nanoparticles, which are deposited onto a crystalline magnesium oxide support. Cafer Yavuz, whose team at the Korea Advanced Institute of Science and Technology developed the catalyst, explains that the material’s unique structure is fundamental to its stability. 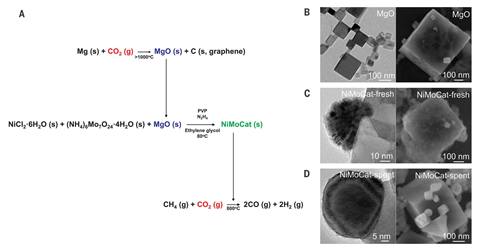 ‘When you start activating the catalysts under reactive gas, the nanoparticles actually move on the single crystal surface because they have a lower melting point than their bulk counterparts,’ says Yavuz. ‘And then what happens is they seek high energy sites, which are step edges or defect sites on the single crystal.’

When the active catalysts reach these high energy sites, they stop moving as they become thermodynamically stable, and it is this that protects the catalyst against deterioration. ‘As all the defect sites are covered with the active catalyst and the rest of the surface is already single crystalline, it’s shielded from unwanted side reactions,’ says Yavuz. 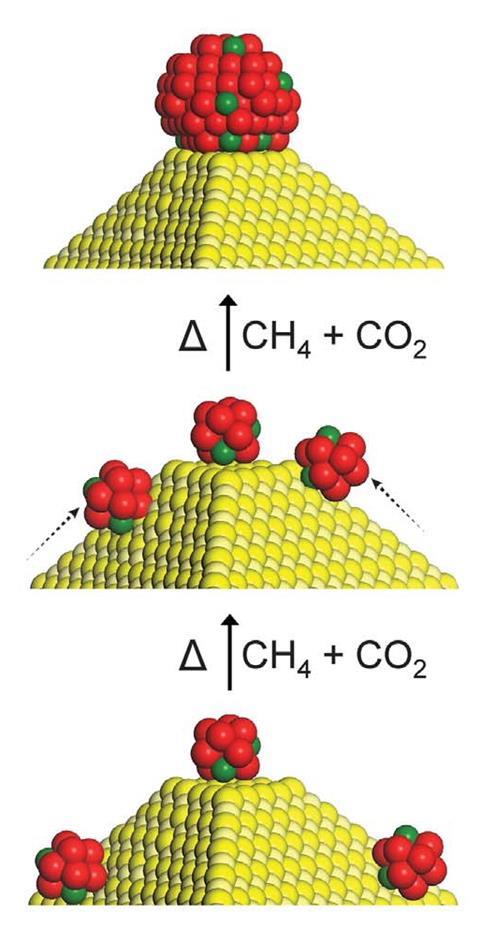 The molybdenum-doped nickel nanoparticles migrate to more thermodynamically stable sites on the magnesium oxide support where they aggregate. This is what gives the catalyst its stability

‘This is pretty unique and has significant practical implications as typical systems deactivate due to coking and sintering,’ says Javier Pérez-Ramírez, an expert in catalysis engineering based at the Swiss Federal Institute of Technology in Zurich. He’s impressed with the way that the defect-free magnesium oxide support improves the catalyst’s durability and suggests that it could open up possibilities in other processes. ‘This concept is disruptive and can indeed be exploited in many other catalytic systems,’ he adds.

However, Pérez-Ramírez also sounds a note of caution, pointing out the complexity involved in scaling-up the catalyst’s manufacture. ‘There are critical aspects to be addressed related to the synthesis protocol, including the use of reducing agents and surfactants, and the preservation of the structure once the catalyst is formulated and shaped in technical form,’ he says.

Yavuz notes that his team has already synthesised 4kg of the catalyst – albeit in 100g batches – and is starting to prepare for testing at a pilot plant run by funding partner Saudi Aramco.

Beyond dry reforming, Yavuz believes that the defect-free catalyst structure could well benefit other processes. ‘The way it works is quite exciting because it could also help other catalysis reactions, not just dry reforming,’ he says. ‘I think we’ve come up with something that could go way beyond this single reaction.’

Other research teams have recently reported coking-resistant catalysts that improve different aspects of the dry-reforming process. These studies are at an early stage, being performed on a small scale in the laboratory, but could also offer ways to make the reaction more practical in future.

A photocatalyst developed by researchers in Japan was able to promote dry reforming at much lower temperatures.2 The rhodium-based catalyst also appears to be unaffected by coking and sintering – at least for several hours. However, the process currently only works on very low concentrations of methane and carbon dioxide. This, in addition to the very high price of rhodium, could be a barrier to commercialisation.

Researchers at the University of California, Santa Barbara have used a molten metal alloy catalyst to increase the hydrogen content of the syngas produced by the dry reforming process.3 A higher hydrogen to carbon monoxide ratio improves the value of the syngas and makes further refinement – for example by Fischer–Tropsch chemistry ­– simpler. By using a liquid-phase catalyst, the team also avoided problems with coking and sintering.

‘We can intentionally react a portion of the methane feed to produce solid carbon and extra hydrogen allowing control over the hydrogen to carbon monoxide ratio,’ says project lead, Eric McFarland. ‘In essence, we are combining methane pyrolysis and dry reforming in a single pot to produce the needed extra hydrogen.’ McFarland suggests that the additional solid carbon produced by the process could be recovered from the melt and sequestered, or potentially even used in products like electrodes and batteries.

Yavuz is impressed and describes the selection of the molten nickel–indium catalyst as ‘ingenious’. However, he also notes that the low pressures required for the process could hinder industrial uptake.